Christmas in the Driskill Mezzanine 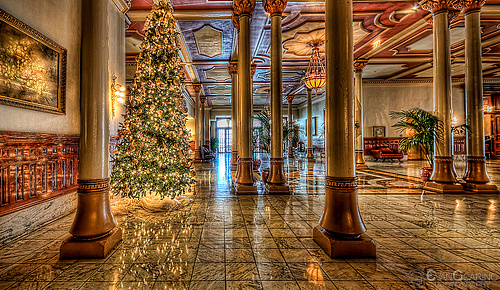 Driskill Mezzanine, originally uploaded by EvanGearing.
Well, this past weekend I thought that I would take a trip to the Driskill Hotel on Monday during my lunch hour. Since it's beginning to be that time of year, I figured they they would have some nice decorations up. They sure do. It's looking very nice there.

Little did I know on Monday after I got back, I received Trey Ratcliff's newsletter stating that his book party was going to be at the Driskill with a photowalk there as well next week! Oh well. At least this way I got some shots without lots of photographers milling about. I still don't know if I can go or not. Also, one bad thing about going during my lunch hour is that I was a little rushed with all of my shots and the comps aren't the greatest. I'll have to go back another time and get some more when I have more time, whether it's Trey's party or not.

This is a shot on the mezzanine level, one floor above the main lobby.

One last thing I want to add here is that I processed these using PS CS4 and the Topaz Plugin Bundle. I'm trying these out as a possibility. I like Nik's software, but I've been using trial modes of those and they are oh so expensive. I think I get very similar results from Topaz and it's so much cheaper. I was wondering if anyone would like to tell me what you think, Topaz or Nik?

I have a couple more shots on my flickr photostream if you would like to take a look.