"A World In HDR" Review 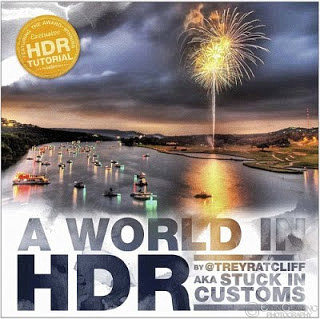 Trey Ratcliff, aka StuckInCustoms, finally released his new book, "A World In HDR".  Ever since he announced that he was writing a book, I couldn't wait to get it. I've been following Trey on his website and drooling over some of his wonderful images he's taken during his travels for quite a while now.  I even use some of the techniques he discusses in his tutorial, which has really helped my processing.  He's a big influence on my work.  I think I signed up to get it on Amazon back in August.  It finally came on Friday last week and I just finished reading it a day or two ago.  Now take what I'm about to say with a grain of salt.  This is my first book review and I still consider myself an intermediate photographer.  With all of that said, here's what I think:

Overall, I'm a little disappointed.  Maybe my expectations were way too high, but I really don't think so.

The book starts out with a chapter on what High Dynamic Range photography is and how your brain interprets light.  He explains that the eye darts around quickly, taking in different levels of light and how your brain puts the different light levels together in a sort of snapshot, giving you a vision of the scenery around you that a normal camera cannot possibly express in one snap of the shutter.   The next chapter quickly explains how art forms evolve, such as music, and how HDR is evolving photography.  In these two chapters, he uses words such as "synethesia" and "eleemosynary" and speaks about art quite well, but that's not for my taste.  I'm pretty simple and just want to get to the meat and potatoes of how to do it.   Time to break out the dictionary.  He then very quickly begins his showcase of amazing images and where he was when he took them.

The photography is stunning to say the least.  He is certainly a pioneer in this medium.  Some of my faves include, "The Magic of Disney", "The Icy Pit to Hell", and "Hong Kong From the Peak on a Summer's Night."  Shots such as these fill the pages through chapter 4 and make up the bulk of the book.  The descriptions of his images are a fun read.  Trey has a wry sense of humor that I enjoy.  When he talks about his Russian tent-mate Yuri or explains the steps you need to take to get a shot inside of a cathedral, I snickered a little too loudly.

Also included with the image on each page is a little technical blurb in red italics that tells you what he did in that particular photographic situation as far as f-stop, iso or even possibly processing.  However, it's not too in-depth and most of this technical info does not explain the actual settings he used in the software, save for maybe a couple of shots.  He really wants you to try to figure it out on your own for the most part.  I was hoping for more things like how much luminosity he used, did he used LucisArt in this one, did he use other software in that one.  Again, great shots, but not much technical info.

Speaking of technical, chapters 5 and 6 go into his tutorial and other software recommendations.  His tutorial in chapter 5 is fantastic.  After his instruction, one could really process photos into HDR quite easily.  However, it's the one you can get on his website for free, except for a couple of minor updates.  That was another little disappointment.  The only new thing I found here is that he changed the opacity of the brush tool for masking from 30% on the tutorial on his website, to 50% in the book.  He also explains double-tonemapping, which is new as far as I can tell.  That's about it.  Chapter 6 also reviews some other software that he uses and those reviews can be found on his website as well.

That's it!  No conclusion or anything.  So overall, I think it's a good book, but disappointing at the same time.  I think the tutorial should've been more toward the beginning of the book.  I think this would help prepare the reader with a foundation of what he did in some of the images where he actually does talk a little about the processing he performed.  Also, I really expected this book to include more about the actual settings he used in the software while processing each image and what other camera settings he used.  I remember watching one of his videos in Atlanta where a person he was with asked him what bracket settings he would use in a particular situation.  He would say something like (I'm paraphrasing), " I would bracket at -1 to +1 here because of this type of light."  THAT's the kind of stuff I was looking for!  I also really didn't care for all of the artsy-fartsy references to Monet, Renoit and the like.  But, this is an art form and I can't really ding him for this.  It's just a little too high-falutin' for me.

I guess I expected a technical book and what I got was an art book.  My first clue should have been the title, "A World In HDR".  That is a good title since it really discusses just that.

It's a great coffee table book and a great book for those getting started in HDR photography or have never heard of HDR photography.  But, for those of us who have been doing this for a little while now, you can get just about everything in the book from his website.  Not that that's a bad thing, but unless you want to help him by buying his book as a thank you for the work he's brought to the world, you may just want to stick with his StuckInCustoms website.
« Previous Post Next Post »