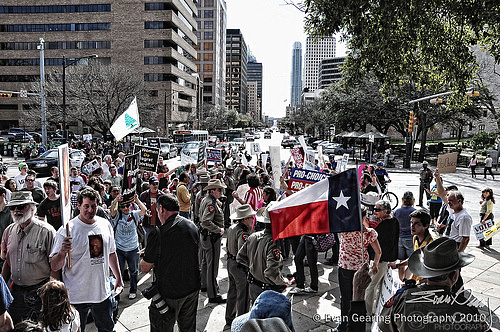 Rally and Protest, originally uploaded by Evan Gearing.
During my stroll Saturday with Van, a pro-life rally happened. There was a parade down Congress Avenue that lead to the Capitol in Austin, TX. Waiting for the marchers were a few pro-choice people protesting the pro-life people. This, I thought, would be a good opportunity to try and see if I have any photo-journalism chops. I think I'm better off doing HDRs, but I thought it would be nice to post something a little different for a change.

Also, I'm not trying to put my thoughts on this issue out there. However, the yin and yang of the people separated by the Peace Officers I thought was rather interesting. Not to mention all of the name calling.. "You're a nazi!", "No, YOU'RE a nazi!!", "Oh yeah, well you're the NAZI!" It just kept going. There were some chants also, but I don't remember those. Exciting to say the least.
« Previous Post Next Post »