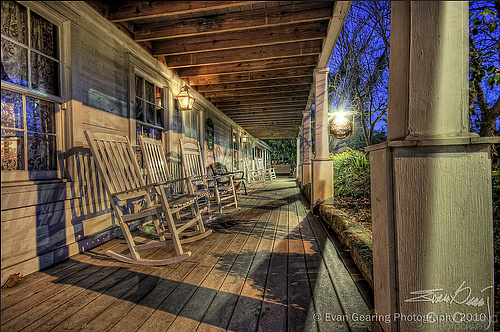 Stagecoach Inn Porch, originally uploaded by Evan Gearing.
Since I had today off, I decided to get some shots since I hadn't been out in a while. Wasn't sure where to go, so I hopped in the car thinking I might go to Walburg, but Salado just kind of popped into my head. So that's what I decided to do and this is what I got.

This shot is the porch of the famous "Stagecoach Inn" in Salado, TX.

Constructed during the 1860s, the Stagecoach Inn was known as "Salado Hotel" and as "Shady Villa" before the current name was adopted in 1943. Military figures George Armstrong Custer and Robert E. Lee, and cattle baron Shanghai Pierce are among those thought to have stayed here. A good example of frontier vernacular architecture, the Stagecoach Inn features a two-story galleried porch with a second-story balustrade. -From the Texas Historical Marker in front of the Inn.

Also, if you ever eat there, they have more of the history of who has stayed at the Inn on their placemats. If I remember correctly, it is thought that the James Gang stayed here once or twice.
« Previous Post Next Post »