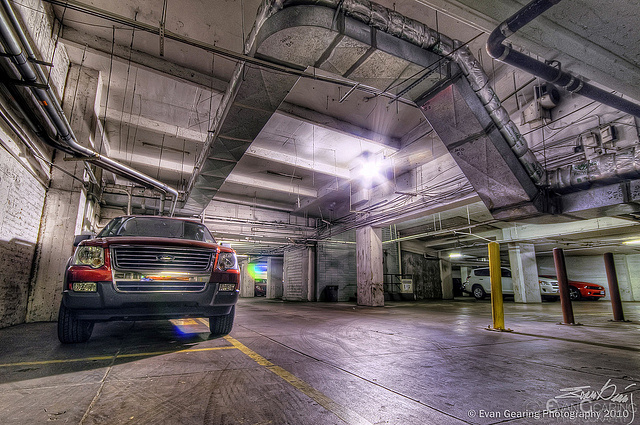 In an effort to keep this blog relatively fresh, I have to - obviously - keep putting out some new photos. One way I like to do that is to head to downtown Austin and try to find something to shoot. This time I tried to take a different tack on my parking garage series and actually get a shot of the inside of a garage. So that's what we have here. I'm not sure of its photographic value as far as all the rules are concerned, such as leading lines, rule of thirds, etc. I'm not even sure if it is that interesting. Sometimes things I find interesting, others don't and vice-versa. I thought this one was kind of interesting because of the air vent that travels along the ceiling. I thought it gave the shot a little uniqueness and sort of leads the eye around the shot a little bit. Am I in the ballpark on this or totally off-base?

Anyway, this particular garage is located on 7th Street in Austin right behind the Driskill Hotel. There are lots of things to shoot there, but nothing beautiful. It's kind of a grungy part of the downtown area. I have a shot of an alleyway with a bunch of trash bins that I will post in the coming days. They're fun subjects to shoot, but some might think, "Seriously, trash bins and parking garages? Can't you come up with something else?" Not right now. ;-)

This shot was processed as usual except for a couple things... The light behind the pillar in the middle of the shot was rather greeen so I had to use Viveza to control that.  Same goes for the bumper on the Explorer on the left.  I also cranked up the saturation on the Explorer with Viveza and also cranked up the saturation of the overall shot with CS4 by about 21, um, percent, or Photoshop units...whatever they are.  In other words, I used the hue/saturation adjustment and cranked the saturation slider up by 21.