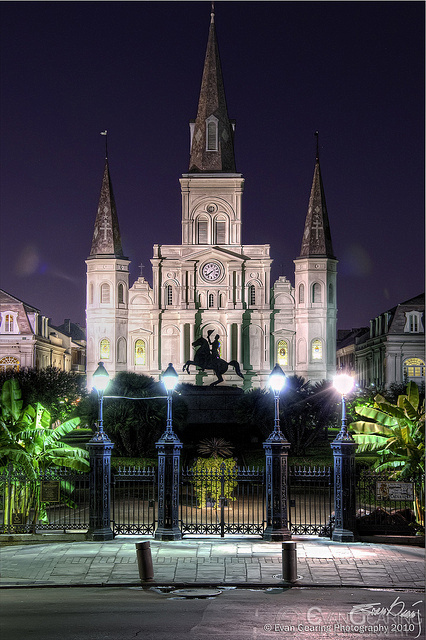 First of all, before I talk about the shot above, check out the panorama of the inside of the Superdome I took during the Panthers v Saints game that I put out on Flickr. I would have posted it here, but panorama shots don't seem to work too well on the old blog. As you can see, we were pretty high up. As matter of fact, we couldn't get any higher. We were in the very last row on the highest level, some where around the 25 yard line. My nose just stopped bleeding. ;-) Still, it really wasn't too bad and we had a great time watching the game from there. One of the good things about the seats at the Superdome at that level is that the bathrooms were right behind us. How convenient!

Now, on to the shot above.  Across the street from Cafe Du Monde sits Jackson Square, and through Jackson Square sits the St Louis Cathedral.  It's one of the most famous landmarks in the French Quarter of New Orleans.  It's the oldest catholic cathedral in the US and Pope John Paul II spoke there back in Sept., 1987.  It really made for a nice shot.

It was a little too dark for my liking when I took this one, but I think it worked out pretty well.  I processed it my usual way, but I added a little Nik Viveza 2 to the cathedral itself to brighten it up a little bit.  I don't think the cathedral is really lit up at night, I just think that the lights around Jackson Square reflect off the building so it was a little dark in the initial processing.