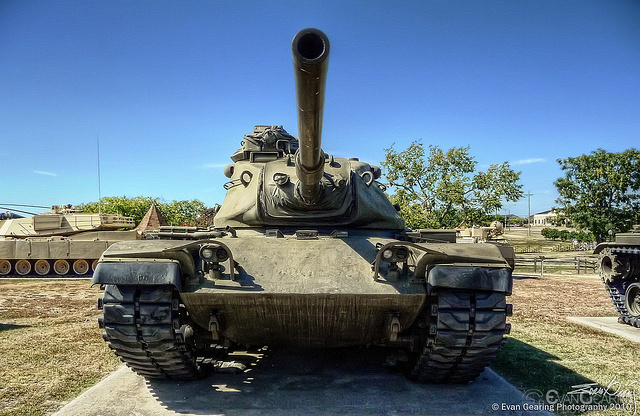 I took this shot up at Fort Hood with my wife Eileen and my nephew Dylan.  Dylan wanted to see the tanks so we took him up there. He thought they were "Awesome!"

This is a World War II-era tank located at the 1st Cavalry Division Museum.  That's a great place to visit because not only do they have old tanks from World War II, but they also have some pretty new stuff as well.  The tank with the desert color camo on it on the left behind this one is an M-1 Abrahms tank which is what we use right now.  There are also Soviet military vehicles there, some of which were capture in Iraq.  Cool stuff!

This shot may not be as awesome since I took it with my Lumix DMC-TZ5 point and shoot.  But, it has auto-bracketing on it and it works pretty well once in a while.  It can only shoot 3 brackets and the widest EV it can do is -1 to +1.  That's OK. And the other thing is that it only saves shots as jpgs.  That's fine also.

I know one thing, I'm gonna hafta go back up there with my DSLR and get some better shots of some of these things some day.  I think there are some great possibilities there!

This shot was processed as usual.  However, I think I also used the duplex filter in Nik Color Efex and sampled the light green color of the tank with a layer opacity of around 20%.