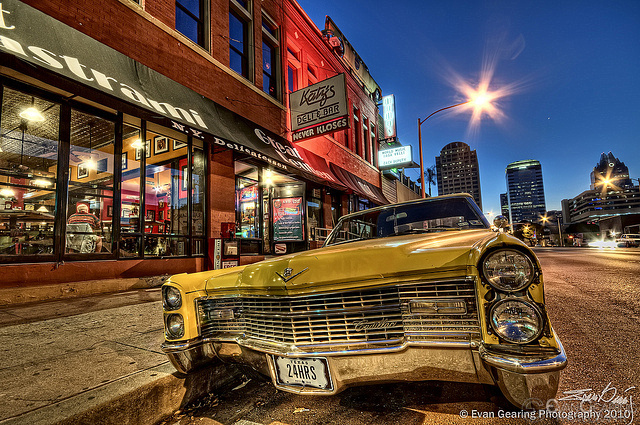 At 6th and Rio Grande here in Austin, is a restaurant called Katz's. It hails out of NYC I believe and are open 24 hours a day. The owner, Marc Katz recently ran for political office here, either mayor or governor, I can't remember which. It could even be both. Anyway, out in front of his deli sits this great old 1970s era Cadillac. It's in pretty decent shape, but it could use a little work. However, I thought it would be a cool subject to try and capture. I hope I was able to a little here.

Another note about this place.... When my wife and I got married, we had our reception at Scholz's Garten. The reception went into the wee hours of the morning. Once it was over, we and a few friends decided we needed more to eat, but everything around Scholz's was closed. So, we thought maybe we could get something on 6th Street. Well, everything was closed except for Katz's. It was a long hike, but we made it. Not to mention we were in no shape to drive, hence the hiking. Anyway, we got there at something like 3:00 am and we still had to wait for a table. I ended up laying down on the floor and taking a nap because I was so tired. Yes, tired. Nothing else. Tired is the word. We did finally get a table and ate, but oh what a night!

This shot was processed as usual.  However, this time I downloaded Photomatix 4 and merged the brackets there instead of using Photoshop CS4's merge to HDR engine.  I think I might start using this more because it has more built-in presets for tonemapping and fusion, and it's de-ghosting capabilities are pretty cool.  Not to mention, I don't lose the EXIF data when I merge with Photomatix! Cool!