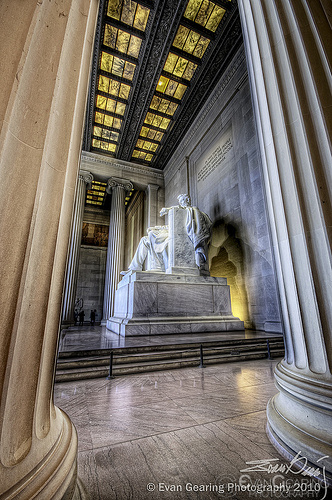 #16 Memorial, originally uploaded by Evan Gearing (Evan's Expo).
Our first evening in DC, we decided to take a walk along the mall. Little did we know that this was the time that I think every school kid in the nation took a field trip to the Lincoln Memorial. OK, maybe just DC. But anyway, there were a lot of them! I guess this is the time to see the nation's capital since the school year is winding down. Or, maybe it's to annoy us semi-serious photographers. That's just a joke btw... It's good that the kids are getting to see this place, but it sure made it hard for me and three women to get around to look at anything. However, we managed. That sort of explains the angle for this shot. There didn't seem to be anyone milling around on the sides, so I thought this might be an interesting take on a familiar subject. I also have one taken directly in front and I will probably put that one out there in the coming days.

Abe Lincoln was one of our greatest and the things he had to endure to keep our great union together was really amazing. He was truly one of a kind.
« Previous Post Next Post »