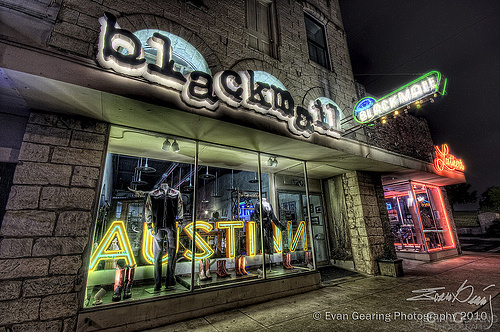 blackmail AUSTIN, originally uploaded by Evan Gearing (Evan's Expo).
Like the Austin Motel shot I posted yesterday, this one was taken in the morning on SoCo or South Congress Avenue in Austin, Texas. That part of town is known for its trendy and eclectic shops and boutiques. I guess this one called "blackmail" only sells clothes that are black. Seems rather limiting, but that's what they do. The reason I liked this place was because of the big neon AUSTIN sign on display in the front window. I thought it looked pretty cool and what's better is that they left it on. Otherwise, if they turned that sign off when they left, I probably would not have taken this shot.

This shot was processed using virtually my same workflow of merging in Photoshop CS4, tonemapping in Photomatix and tweaking in CS$ with the Nik Color Efex plugin, specifically the pro contrast, tonal contrast and bleach bypass setting. I then cleaned it up with Noiseware Pro and sharpened with Nik Sharpener. I also masked in the sky from one of the raw brackets to help cut down on the noise these night shots get when tonemapping in Photomatix. It really helps.