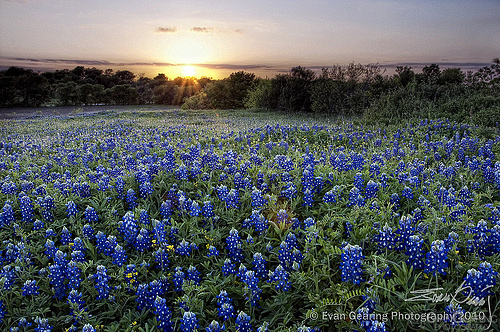 Bluebonnet Sunset, originally uploaded by Evan Gearing (Evan's Expo).
UPDATE:  This shot made the local news weather broadcast and blog on KXAN.  You can see it here:


Thanks to KXAN for providing the video for me to post here.  Pretty cool.  If you have some nice photos of wildflowers, send them in to [email protected] and you might get Jim to mention yours as well!

Springtime in Texas is a great time of year. That's when the wildflowers put on an amazing show. These flowers here are known as bluebonnets and are the Texas state flower. This year has been a great year for wildflowers more than others because of the cold and wet winter we had this year. Last year was such a disappointment since it was so dry and hot the last couple of years. Some are saying this may be the best year yet. However, the place I took this had an even better display two years ago. They were even more dense than this. Anyway, this field is just on the edge of Georgetown where 29 and TX 130 meet. There's a Nazarene church there and this field is right behind it. Pretty spectacular I must say. But, in a few short weeks, these will be gone and it will be hotter than... um, something that's really, really hot.

This shot is a sort of mixture of traditional photography and HDR. It's three bracketed raws taken from -2 to +2 at two stop intervals. I merged them in Photoshop CS4 and tonemapped it in Photomatix. However, when I opened it back up for post-processing in CS4, I decided to take a different tack. I grabbed the brightest bracket and masked in the flowers in the foreground and then masked in the darkest bracket for the sky. The only thing left over from the tonemapping in Photomatix are the trees. Once I did that, I did my usual thing with Nik Color Efex using the pro contrast, tonal contrast and bleach bypass filters. I even brought in the graduated neutral density filter to darken the sky a little bit more. I cleaned it up with Noiseware and sharpened it with Nik Sharpener.
« Previous Post Next Post »