Corner of Congress and Nellie 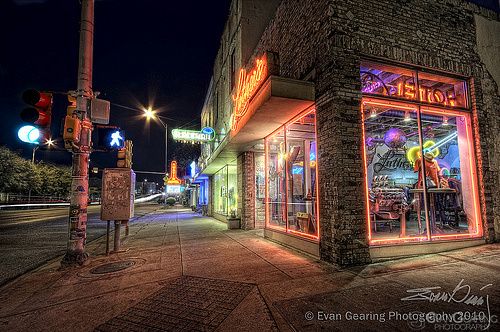 Corner of Congress and Nellie, originally uploaded by Evan Gearing (Evan's Expo).
Well, this is the last in my SoCo series. If you've read my two previous posts, you will see that those two subjects are represented in this shot. This one also shows a shop called Luther's from the corner of Congress and Nellie. I'm not sure what that store specializes in, but I think it's clothes. And I think I'm correct in my assertion that it's probably trendy/cool clothes. In other words, stuff that me as a consummate nerd would probably not be able to pull off. Anyway, I liked all three of these shots because of the neon that these places show off. All except maybe for that Austin Motel sign. Speaking of which, did anybody out there get my orchid joke or was it too subtle for y'all to pick up on?

This one was processed my standard way. I really need to document my work-flow. I guess that should be the next priority. Anyway, tomorrow I'm gonna try to take a couple hours in the middle of the day to try and find something to shoot in S. Austin. I just have no idea what that will be. If anyone out there has any suggestions, please comment here and I will check it out. Thanks!
« Previous Post Next Post »