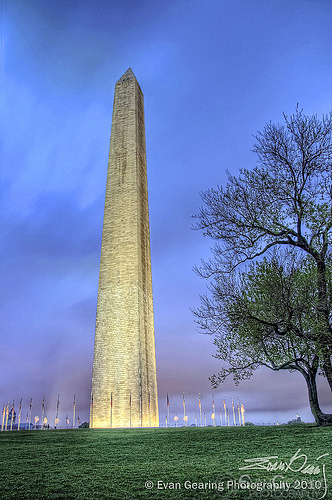 The Washington Monument is the most prominent structure in Washington, D.C. and one of the city's early attractions. It was built in honor of George Washington, who led the country to independence and then became its first President. The Monument is shaped like an Egyptian obelisk, stands 555’ 5 1/8” tall, and offers views in excess of thirty miles. It was finished on December 6, 1884.

Taken during our first trek along the mall on our way to finding a place to eat. We ended up in Chinatown at Fado's Irish Pub where everyone was watching the Capitals play the Canadiens. Good times.

I used the trusty old 18-105 kit lens for this one. It is comprised of 5 bracketed raws ranging from -2 to +2 EVs at 1 stop intervals. I merged it in Photoshop CS4, tonemapped it in Photomatix and post-processed it in CS4 with the Nik Color Efex plugin, using the pro contrast, tonal contrast, bleach bypass and a little white neutralizer at varying opacity level on the layers. I also used Noiseware Pro on the weaker noise setting and adjusted the opacity to 50% on a layer and the sharpened with Nik Sharpener at 85% opacity. Whew.
« Previous Post Next Post »