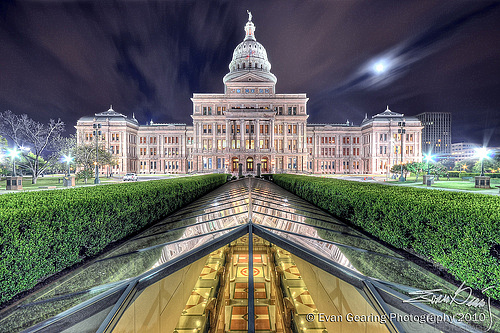 A few weeks ago, I posted a shot of the Texas Capitol under a full moon with a story of how I kind of screwed the pooch with that particular shot. Well this is the other shot of the Capitol I took on that fateful morning, doing the same stupid thing I did with the previous one. However, I think they both turned out pretty nice considering. I just HAVE to keep remembering to check my settings like I discussed in the post mentioned previously. I still find myself forgetting to do that. I think it's a bad habit left over from my point and shoot days. Old dogs and all that...

Processing this shot was pretty standard for me. I think the main thing I did was mask in the sky from the longest exposure bracket and I also cloned out something that looked like a black rubber band that was laying on the glass of the extension.

Speaking of processing, I'm very close to publishing my HDR processing workflow. I hope to have it out by the end of the week. It's basically an explanation of the general settings I use for about 75% of the shots I process. I hope once I put it out there, you all will take a look at it and ask questions or provide suggestions to help make it a little better. Currently, it's just a written document stating what I do. I don't have any screen shots except for maybe one showing my tonemapping settings in Photomatix. I'm debating whether to leave that in there or not because just writing the settings down would take up less space than the screen shot of the settings. That's the whole reason for not having screen shots... I think they may take up way too much space, but I might add some in later on if people think it would help. I like to think the explanation/instruction of what I do will be good enough, but I'm definitely willing to change it.