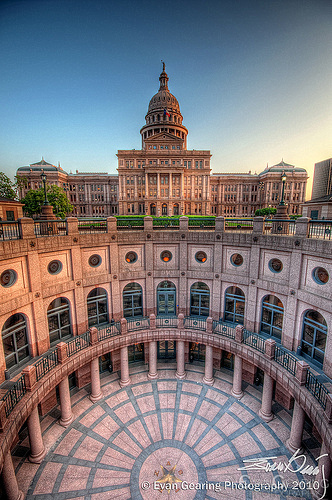 Capitol Underground Rotunda, originally uploaded by Evan Gearing (Evan's Expo).
Well, I'm taking a little bit of a break from the DC pictures. But, never fear, I will bore you with plenty more soon! In the meantime...

This past Friday, April 30, 2010, a very good photographer that I've been following named Dave Wilson organized a local photowalk here in Austin. A few of us showed up and had a very good time. We started out from Auditorium Shores on Lady Bird Lake (aka Town Lake) and made our way up to the Capitol. We stopped at the Austin City Hall for a few snaps and then strode Congress Ave to our final destination. I have a few shots of the capitol already, but I was always fascinated by one of Dave's shots in particular. I asked him if he did a panorama of it or something and he said that all he did was use his D90 and Sigma 10-20 lens vertically. Duh, I should've thought of that, but I just didn't think it would work for some weird reason. So, while we were there, I thought I'd give it a go. Here's the result.

Funny thing is, almost everyone left while I was taking this shot. I However, I did walk back up Congress with two other stragglers and we had a nice conversation. Those two were Claudia Cobianchi and William "Whey" Johnson. I guess the three of us were just too slow. We did catch back up with the main group. That was about the extent of the walk for me. I was too tired to stick around any longer after putting in a full day at work and then walking in the hot, yet not summer hot, heat.