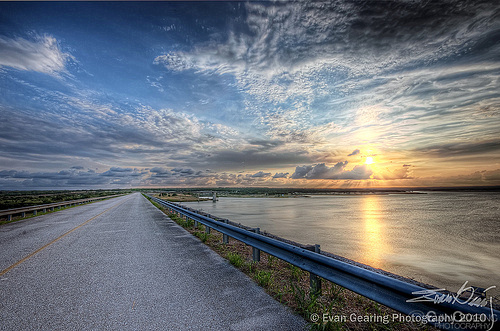 My previous post mentioned that I took a trip out to Lake Georgetown to get some sunset shots.  This is one of the better ones from that little trip.  It's not bad, but I was hoping to be able to get another similar shot only with the sun behind the clouds.  It was almost there, but a guy wearing a red vest while riding a moped sped by saying that they were going to close the gate soon.  I wasn't sure what capacity he played at the dam there, but I didn't want to take any chances getting stuck out there on a Sunday night..  Son of a...!

I used my standard processing on this shot.  However, I merged a three shot bracket from -2 to +2 at 2 stop EVs, and I merged a 5 shot bracket from -2 to +2 at 1 stop EVs.  The 5 shot HDR had a lot of ghosting in the sky, so I masked in the sky from the 3 shot HDR. The other thing I did was brighten the road with Nik's Viveza 2 demo.  I just dropped a control point on the road, bumped up the brightness a smidge and saved it.  Love that Viveza! Other settings include ISO 200, aperture f16, focal length of 15mm, and shutter speed of 1/80.
« Previous Post Next Post »