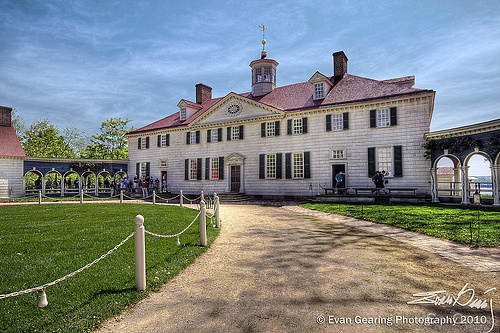 "When George Washington lived here, Mount Vernon was an 8,000-acre plantation divided into five farms. Each farm was a complete unit, with its own overseers, work force of slaves, livestock, equipment, and buildings.

The farm where Washington and his family lived was called the "Mansion House Farm." This is the part of the plantation that visitors see today. Washington developed the property's 500 acres to create a fitting setting for a country gentleman. He designed the grounds to include a deep border of woods, rolling meadows, serpentine walkways, a pleasure garden, a kitchen garden,and groves of trees. Between the Mansion and the shores of the Potomac River lay an extensive park.

As nearly as possible, Mount Vernon was a self-contained community. Nothing was purchased that could be produced on site. Yet the Mansion House Farm was so well designed that the service lanes did not intrude upon the area reserved for the enjoyment of Washington, his family, and their many guests. From the Potomac River on the east to the Estate's west gate entrance ran the pleasure grounds and wide vistas; along the north-south line were the outbuildings, or dependencies, where much of the work was done. Over the past 150 years, George Washington's architectural achievements at Mount Vernon have been painstakingly preserved and restored for visitors to appreciate both in person and via our virtual tours."

This picture proved a bit tricky for me, so I cheated a little bit. It's a 5 shot bracket that I used my standard processing on, but the sky was totally clear that day. I thought some wispy clouds might add a little something to it. So, I decided to try my hand at some masking using something other than just the paintbrush tool. Instead I used the magic wand and selected the sky, inverted the selection and hit the quick mask. I used this b17 shot for the sky and then adjusted the opacity to about 40 to make it blend in with the sky from the original. I thought that would make it a little more natural. I think it looks pretty good considering the original was a little blah. At least there's a little more pizazz to it. Let me know what you think.
« Previous Post Next Post »