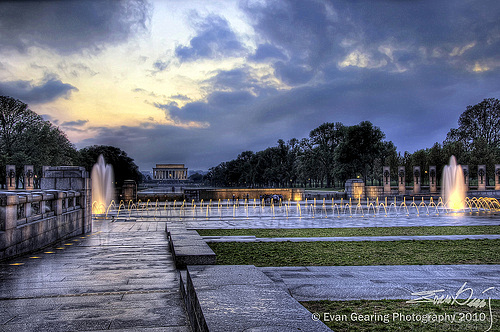 In the interest of efficiency, not to mention that I think both of these shots are kinda cool with the clouds and all, I thought I'd do a two-for-one deal. Plus, I promised to bore everyone with more of my DC shots. So here you are..

The shot above is one taken at the World War II Memorial over looking the Mall towards the Lincoln Memorial at Sunset. It had rained about two hours prior to this show, but it still wasn't quite dry yet when I took this. I think that helps add a little drama to the shot. While we were there, I was taken by a part of the memorial that show a lot of gold stars. I wasn't sure what they represented, so I looked it up. On that wall there are 4000 stars each on representing 100 killed during the war. It's pretty powerful to see as is the rest of it. I'm glad we finally have something to represent "The Greatest Generation." 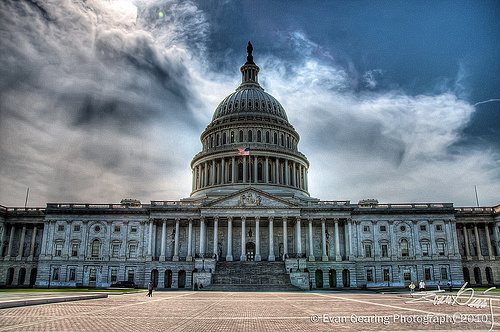 This was taken while strolling the ground of the Capitol (obviously). It has a few flaws as I took it hand-held and has a little noise in it, but I really like how the overall look came out after the processing. I think the clouds really add something to it, like whatever it is they are doing in there is bringing on a bad storm.

The top shot was a 5 bracketed raw shot taken with a tripod whereas the bottom one was a 3 shot bracket taken hand-held. Other that that, my usual processing took place which I hope to elaborate on sometime soon. I do have a work-flow document in the works to reference in the near future. It still needs some work, but it should be out there soon.

Thanks for following and I hope you enjoy these shots.