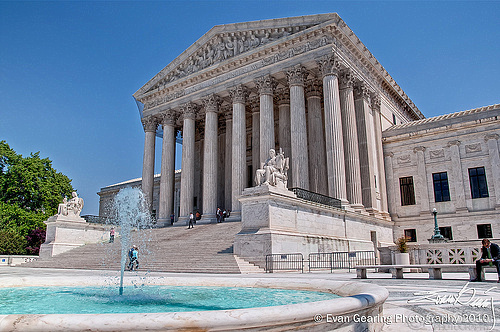 US Supreme Court, originally uploaded by Evan Gearing (Evan's Expo).
Twenty some odd years ago, I lived out in DC, but I never visited the Supreme Court. So while we were there this time, we thought it might be a good idea to check it out. I think one time I tried to get in before, but for some reason I couldn't. It was closed, or they didn't trust my mug, or something. Anyway, this time it was a beautiful day as you can see and it was open and we checked it out. It's a very impressive place. We were able to go inside and even look inside the courtroom. Very cool. There were even people lined up inside to watch the supreme court go into session. That would be something fun to do sometime I think. From the outside, this place reminds me of some sort of Parthenon or Greek temple. I guess that was the point.

Well, this shot, like my US Capitol Art shot was fused in photomatix instead of merged in Photoshop CS4 and tonemapped in Photomatix. I tried doing the merge to HDR and tonemapping, but the clear blue sky just doesn't turn out right when doing that. So, I fused it and then did my Nik Color Efex thing as well as the Noiseware and Nik Sharpener thing. Sometimes the fusing just works better. I'm glad it's an option.

Oh, and one thing I forgot to add, this was taken hand-held.  It was 3 raw brackets from -2 to +2 at 2 stop intervals using my handy-dandy 18-105 kit lens.  ISO was 200 and aperture was f11.  I took this hand-held because I REALLY got tired of lugging the backpack and the tripod around while on our little expeditions.  There's got to be a better way, I just don't know what that would be.  Maybe a little Rascal scooter or something.  Well, maybe not...
« Previous Post Next Post »