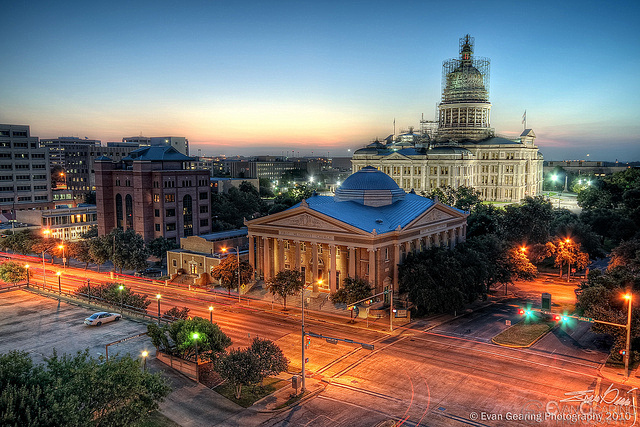 The garage at 12th and Lavaca and Guadalupe provided this view of the capitol with the First Methodist Church below. It's another in my quest to find different angles from some of the parking garages in Austin.  Luckily with this garage, I found the elevators so I didn't have to climb 7 or 8 flights of stairs.  That makes things a little easier and also makes getting the shots a little faster so I don't get to work late. ;-)  At the Capitol, you can see they are doing some restoration on the dome, so someday I may have to go back and get a shot from here when that stuff is gone.

I processed this the usual way, but I did figure out something that helps a little.  Usually I merge 5 brackets inside Photoshop CS4 and then tonemap the result in Photomatix.  I think CS4 aligns the shots better than Photomatix and I like the result it gets.  However, it doesn't seem to work as well for the skies, especially if the sky is cloudless like this one here. I end up getting lines in the sky instead of a gradual, smooth change in color from the top to the horizon.  So, I did another merge in Photomatix and then masked in the sky from the Photomatix-merged result with the rest of the one from the Photoshop CS4.  It's a bit more time-consuming, but I think the result is worth it.