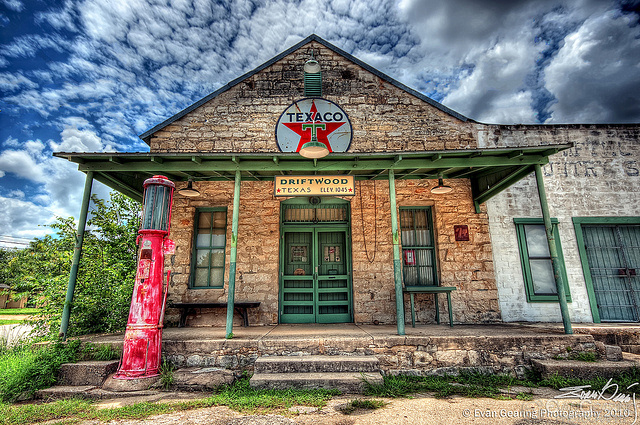 This is another shot I took while in Driftwood, Texas a few weeks ago. It's an old Texaco gas station and what used to be a country store that is now - from what I've heard - someone's actual home. It certainly would make a unique home to say the least. In a way, I'm kind of sorry that it's no longer a store because it would've been fun to go inside and take a look around. But, it was not to be.

Another reason I posted this shot is to bring attention to a little tool I've discovered recently. A few months back, Adobe released Photoshop CS5. I currently own CS4 and am very happy with it. However, CS5 has one thing that I would like to have that CS4 does not have.  It is the new "Content Aware Fill" tool. It lets one remove watermarks and other unwanted items from a photo with relative ease. Below is a little video of what content aware fill can do:


Isn't that cool? Man I would love to have that. However, to upgrade to CS5 costs about $200. So, I went looking for an alternative and sure enough, I found one that works with the Gimp program.

If you haven't heard of the Gimp, it's basically a free program that does a lot of similar stuff that Photoshop can do, but mainly just the basics. It's like Microsoft's 'Paint' on steroids. It's actually a pretty good program for the price... free! With the Gimp, there are oodles of plug-ins you can download from various sites to do certain things, all of which are free as well. One of the plug-ins I found was something called 'Resynthesizer' written by Dr. Paul Harrison.  It is basically the content aware fill that CS5 has, but, again I like to talk about price, it's free! Check out the next video of what Resynthesizer with the Gimp can do below:

I used it for the Driftwood photo above. In that photo, there were powerlines that went across the top portion of the shot and distracted from the photo. So, I used the Gimp with Resythesizer the get rid of those from the sky and from the building. A caveat with the Resynthesizer tool is that it seems to work best when removing small objects from an area that has a solid color background, like a piece of trash from the grass or stuff from the solid sky like in the video above.  Removing powerlines from in front of the brick or the "Texaco" sign did not work well at all.  Resynthesizer could not recreate the structure of something with distinct lines or geometric shapes once the offending portion of the shot was removed.  It did work OK when removing the powerlines from the cloudy sky, however.  But, I did need to go back with the healing tool in CS4 and make the clouds where the powerlines were a little more natural.  After using Resynthesizer to remove the lines from the front of the building, I had to go into CS4 and use the clone stamp tool to make the brick look a little less discombobulated.  Anyway, the original shot with the powerlines in it is below: 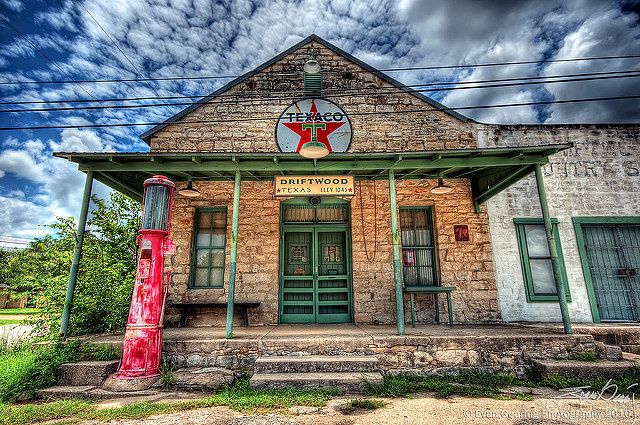 So as you can see, it's not too bad for free.  It's not perfect, but it might work for you if you want to move that leaf from an otherwise pristine lawn or remove that unsightly piece of trash from an untouched sandy beach.  I'm not sure how it compares to CS5's tool, but I'm pretty sure it's probably not as good.  If the Gimp's clone tool is any indication as to how other tools are, CS5 is probably much better.  But for the price, I'm not complaining and it worked OK in this little test.

If you would like to try it, here's what you need to do to get it (this is for Windows users, but I'm sure you Mac users out there will be able to "translate" these instructions to get it to work on your machines):

2. Get the Resynthesizer plug-in from http://registry.gimp.org/node/9148.  The files inside the zip file will go into your profile in Windows, and into the .gimp-2.6 folder.  For Windows7 users, the path would be c:/users/your_username/.gimp-2.6.  For XP users, I think it's c:/documents and settings/your_username/.gimp-2.6.  Inside that folder are two folders, 'plug-ins' and 'scripts'.  Put the resynth.exe from the zip file into the plug-ins folder and put the smart-enlarge.scm file into the scripts folder.  There is one other file in the zip file called smart-remove.scm, but that does not work right and needs to be replaced.


3. Get the correct smart-remove.scm script from http://registry.gimp.org/node/15118.  Put the file into the scripts folder mentioned in step two.

If you had the Gimp open while installing the plug-in or the scripts, close it and open it back up again and everything should be there.


That's it!  Now just follow along with the second video above and you should be on your way to removing stuff from your photos for free!!!


I do ask a favor; if you try it out, let me know your results.  I'm curious to hear other opinions.  Thanks!