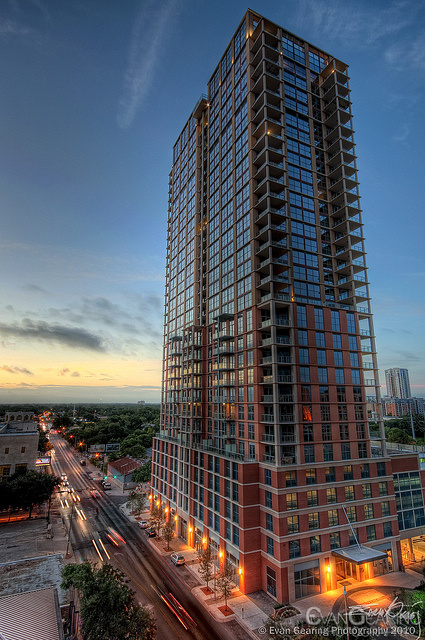 Well, I began my quest to scale the parking garages in downtown Austin to see what kind of views I could get.  My first stop was the garage on the corner of Brazos and Cesar Chavez.  There are actually two garages sitting right next to each other.  I found the first one across from the Hampton Inn to be a little difficult to find any access to the upper level by stairs or elevator, so I made my way to the next one and had a little more luck.  I found the stairwell and hauled up 9 flights of stairs in record time.  You see, I did all this on my way to work so time was of the essence. Oh, and even though it was morning, it was still hot due to the humidity, even if it was a crisp 84 degrees out. ;-)  So, I worked up a pretty good lather during my trek.  Good for the co-workers when getting to work. Hehe.  At the top, there are some pretty good views.  One I thought particularly striking was the view of the new Four Seasons Residences Building on Cesar Chavez seen here.  These are luxury condos that have gone up recently and look rather, um, luxurious.  There are so many of these places springing up in Austin now but I'm not sure how well they are selling.  They started before the economy took a sh-- so it could be a little dicey for the developers now.  Anyway, I liked the view of the building just before the sun came up.  It worked out well.  The only thing I'm sorry about is I didn't have enough time to get a good exposure for some decent light trails in the traffic below.  But, this isn't too bad I guess.  Oh, and lastly, once I shot this, I had to haul ass to my car.  Luckily I found an elevator to help expedite the ass hauling.  I did get to work 5 minutes late, but no one needs to know that.

I did my standard processing on this one with a little Nik Viveza 2 on the building to brighten the windows and the brick color facade in the middle.