Graffiti is a 'Must' 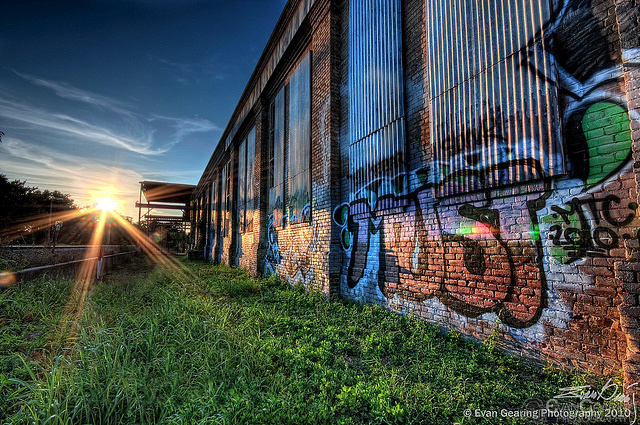 Across the tracks from the old Amtrak station in Austin lies this abandoned building which appears to have been some sort of warehouse or something at one time. Now it is covered with some very impressive graffiti, if one is impressed by that sort of thing. This is a shot of that building as the sun begins to set. It's the side that faces the old station. I think the word shown is "Must", but I don't translate graffiti too well.  On a side note, what is the deal with graffiti 'artists' anyway?  I mean, do they all go to the same place to learn their particular fonts they use while spraying whatever it is they spray onto the side of a building?  It looks like everywhere you go, the same style is either used in marker or spray paint, whether it's on a wall or a street sign.  Not to mention, it's the same in any part of the country! I guess they all go to "Street U. - Gangsta" or someplace like that.  Well, I don't get it.  But, I digress.

While wandering around this place, I found an outbuilding that had broken windows in it. I peered through and found what appeared to be a residence of some of the local homeless population. There was an old mattress, blankets, an ashtray full of cigarette butts and other things strewn about. it was pretty nasty in there to say the least. I figured there must of been someone close by however, because there were a couple of half-filled Ozarka water bottles in there that looked pretty new. Needless to say, I tipped the heck out of there.

This was shot was taken during Saturday's photowalk with friends Van Sutherland and Mike Connell, two very good photographers in there own right.  Check out their blogs if you get a chance.

This HDR used the same workflow I always use, but I switched it up a little here.  I tone-mapped it in Photonmatix once using the 'high' light mode setting and saved it as a tiff, and then tone-mapped it again using the max setting and saved it as another tiff.  Then, in CS4 I masked in the sky from the max tiff to the tiff with the high tone-mapping.  Then I did the usual after that.  I think the sky looked a little better that way.

Other camera settings include: