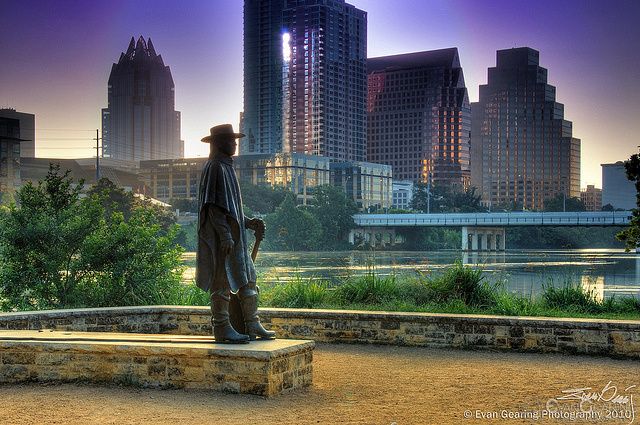 One month ago today, I took a trip to Auditorium Shores to see what I might get.  It wasn't the best of ideas, though, because the light at that time of day was getting bad.  Plus, the humidity of that morning really made it quite hazy.  But, since I was there, I tried to take a few shots anyway and see if I could do something with them.

Initially, I didn't like this shot, but the more I worked with it, the more it grew on me.  I processed it the usual way, but I tweaked the sky to give it a purple hue and warmed up the ground with a sort of orange-ish color.  I think I used the bi-color filter in Nik Color Efex to achieve this.  My goal was to sort of pay homage to Stevie and his idol, Jimi Hendrix.  SRV used Hendrix as his inspiration and he played "Voodoo Chile" better than Hendrix, IMHO.  However, Jimi's version was a little more raw which gave it a less polished, but still excellent sound.  But, I digress.  I thought with the "purple hazy" sky and the statue of SRV, it kind of pays tribute to both.

One thing I've noticed about this shot that I wish I would've done better was frame his head and hat better between the buildings in the skyline.  Always have to think about composition down to the last detail.  That's one thing I'm not talented enough to do in post-processing!

Anyway, I hope you enjoy this shot and thanks for visiting!