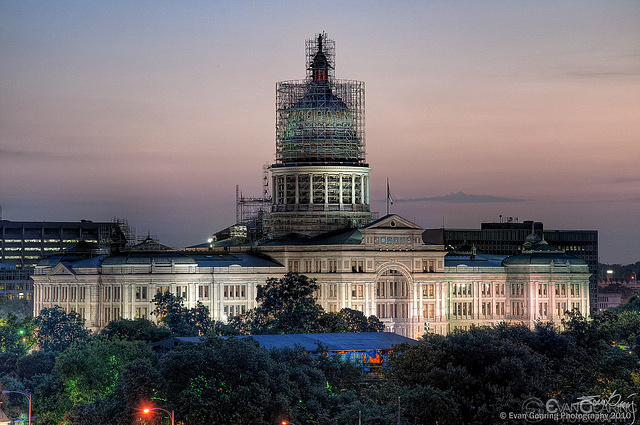 Yawn, ho-hum. Or, in the words of the late, great Chris Farley, "Whoop-dee-friggin'-do!!"  It's another shot of the capitol.  But, I've found a new vantage point to shoot from during my little self-imposed parking garage excursions.  From the Chase Bank garage at 9th and Lavaca you get the view seen above.  It's an angle I haven't seen yet.  And, with the scaffolding around the dome, it makes the shot a tad more interesting, even if it is another boring shot of the capitol.

Something else about this shot that I wanted to point out is in its processing.  I did the usual hdr stuff; I made two merged shots, one in Photoshop CS4 and one in Photomatix. Then I tone-mapped them both in Photomatix to see which ones I liked better.  I wasn't particularly pleased with the results of either so I thought a LOT of masking was going to be needed, especially for the sky.  So, I brought in the one from Photomatix and layered in one of the brackets to start on the sky.  But when I was fiddling with the menu in Photoshop, I found something called "Auto-blend".  I thought, "I wonder what that does?" and kicked it off.  It started cranking out all kinds of wild masks and things and what I ended up with was basically what you see above.  I did a little noise reduction, sharpening and color corrections in a couple of spots, but for the most part this is what came out.  I'm rather impressed as this was better than what I had from my tone-mapped shots.  The sky came out really nice especially around the scaffolding and the flagpoles.  Those types of things can be problems during the tone-mapping process as you HDR guys out there know.  I guess auto-blend has been around since CS3 but it isn't something I've messed with. From what I've read on the web, it's meant to be used in conjunction with "Auto-align" for stitching photos into a panorama, but it seems to work well for combining shots in layers as well. The following is from Adobe's website regarding auto-blend:

"Use the Auto-Blend Layers command to stitch or combine images with smooth transitions in the final composite image. Auto-Blend Layers applies layer masks as needed to each layer to mask out over‑ or underexposed areas or content differences. Auto-Blend layers is only available for RGB or Grayscale images. It does not work with Smart Objects, video layers, 3D layers, or background layers.

Auto-Blend Layers applies layer masks as needed to each layer to mask out over‑ or underexposed areas or content differences and create a seamless composite."

It's a pleasant surprise and something I will have to remember as I process stuff in the future. Another thing to play with!