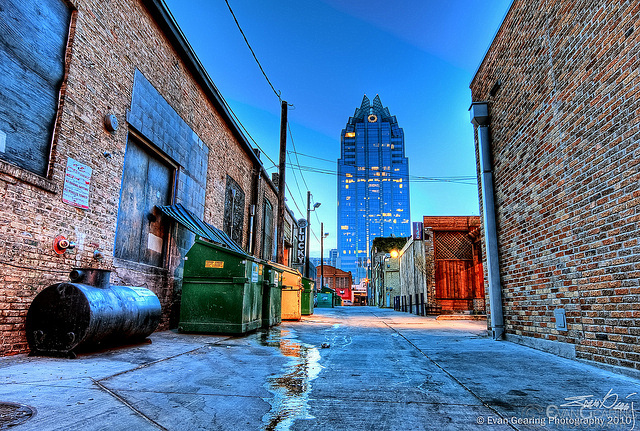 It's getting to be that time again where I try to get some shots in the morning while on my way to work.  However, with only a few minutes to spare, I find it hard to think of where to go to get something interesting.  The warehouse district in Austin is an area I've thought about, but a lot of that area is made up of bars and clubs which of course are closed.  But, behind those places are alleys that provide an interesting perspective of the city.  I may try to work in that area little more to see if anything else strikes me as interesting.

Another thing I thought about trying is to scope out some of the parking garages downtown and see what kind of view of the city they may have.  I've been pretty lucky with the view at the parking garage at Brackenridge Hospital, except for the rent-a-cop that tried to show me who was boss.  Obviously he was, so I didn't give any lip on that matter.  Hopefully I won't run into those sorts of problems at other garages.  The Littlefield garage across from the Driskill was another nice one, but I never did go all the way to the top on that one.  Maybe that will be a good place to start.  Anyway, it's something to try since I would like try some unique angles of the city here.

This shot is an alley behind Fado's Irish pub and other bars in the warehouse district with the Frost Bank building in the background.  To me that building looks like a giant nose-hair trimmer.  It's still a nice looking building.

I used my standard processing for this shot.  Other settings include: