January 16, 2011  •  Leave a Comment
Plaza Saltillo is in the east side of Austin and is a location for one of Capital Metro's train stations. It has a lot of potential for activities with a gazebo and some other amenities, but that has not been realized yet. I think once the trains really catch on in Austin and people have a reason to travel to the east side, this plaza will really become something to behold.  As stated in the link at the beginning of this paragraph, "Austin's new Plaza Saltillo was inaugurated by a visiting delegation from our Sister City of Saltillo, Mexico, for which it was named. The City of Saltillo generously donated ornate traditional Saltillo benches for the Plaza. Inspired by the popular plazas of Mexican cities and towns, Plaza Saltillo's design includes a bandstand and an arcade for sidewalk vendors. The Plaza will be a stop for Capital Metro's new commuter rail system."

I think the shot below is one of the arcades.  From the inside it looks like an area where you would present your ticket to gain entrance to the plaza, but an arcade would be a good second. Other than that, I really don't know what it is.  However, I liked how the arches framed the lights out in the plaza.  Pretty cool look! 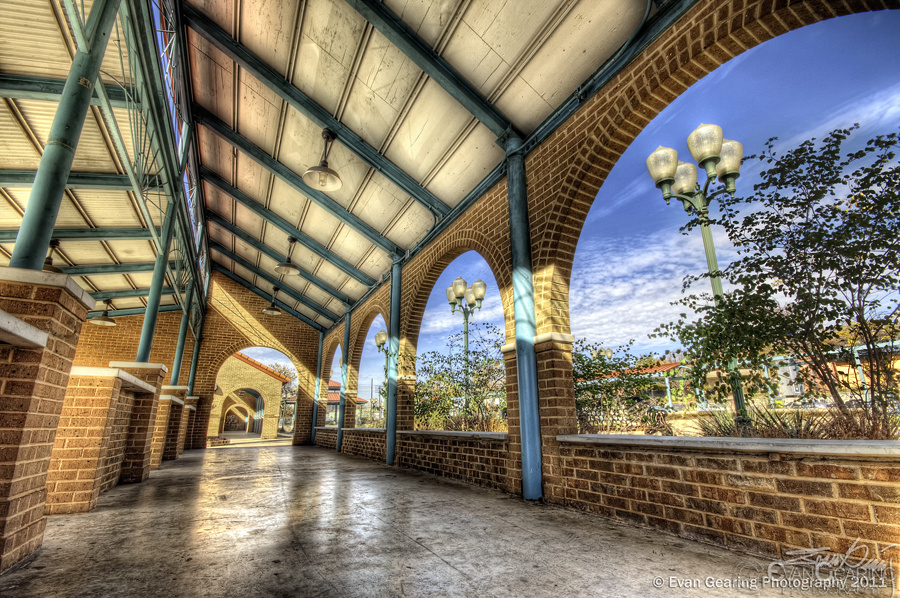