October 19, 2011  •  Leave a Comment
I wanted to save this shot for Thanksgiving, but I just couldn't wait.  In Plymouth, MA, there's a recreation of the Pilgrims initial settlement as well as a depiction of how the Native Americans of the Wampanoag tribe that the Pilgrims befriended back in the early 1620s.  This is all shown at the Plimouth Plantation.  Why the spelling is different from the town's name of "Plymouth" is beyond me, but that's a discussion for another day.  In both the Wampanoag and Pilgrim areas of the plantation, there are people actually depicting how they dressed and acted back then.  Of course it was little more pronounced on the Pilgrim side because the language was the King's English.  It would be a little hard for the Wampanoag to explain things in their native tongue to us.  So they spoke normally, but dressed in authentic attire.  Unfortunately, the man here in the wheelchair was unable to get too dressed up, but that did not diminish his explanations or his authenticity in my eyes.

This picture shows the inside of what the Wampanoags call a "long house". It was made exactly how the Wampanoags of the 1600s made them. It's made of cedar posts to hold the structure up and elm bark for the walls and siding.  It's sealed using a combination of pine tar and ash.  That would help keep the rain out.  These structures are so strong that they can withstand a small hurricane.  As a matter of fact, this very structure survived the recent Hurricane Irene with no damage.

The gentleman in the wheelchair in this shot told us all about that.  He also said that these long houses are basically the winter homes of the Wampanoag.  One set of families will build several of them, up to nine, that are approximately a football field long lining up next to each other.  Then families would occupy their own little portions of these.  It was very fun to listen to him speak.

The plantation is a fascinating place and if you ever get to visit, please do.  I don't think you'll be disappointed.

I hope you enjoy the shot and thanks for dropping in! 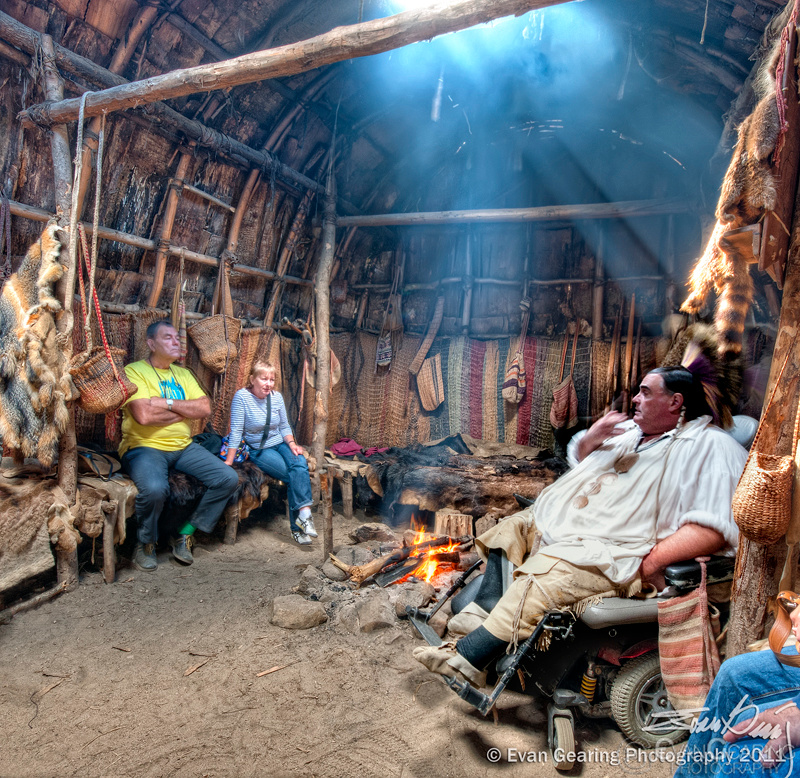