Inuksuk On Whistler Mountain, BC, Canada 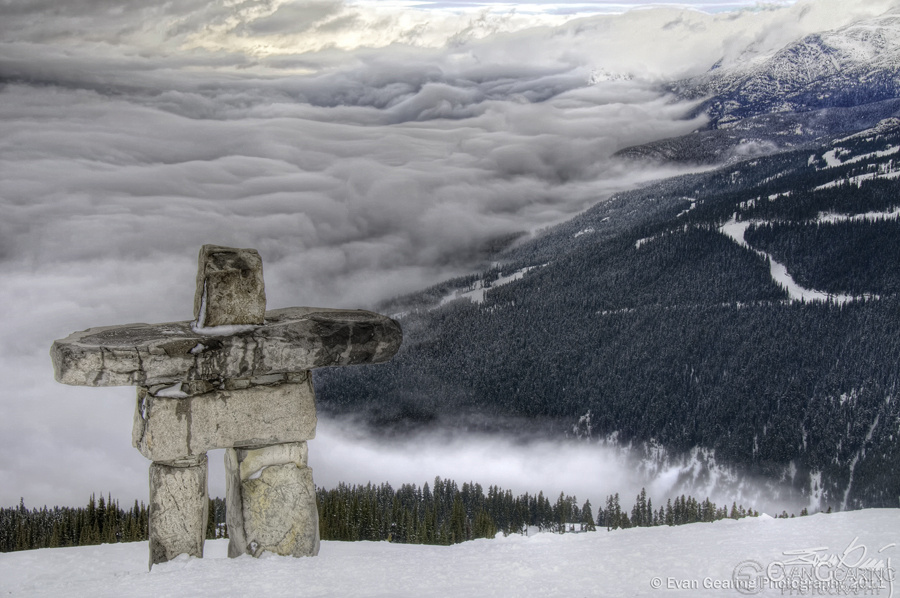 Last week, my wife, some friends and I took a ski trip to Whistler, Canada, site of the 2010 Winter Olympics. What a beautiful place!

Whistler resides about 2.5 hours north of Vancouver by road in the temperate part of western Canada. As a matter of fact, the road that takes you to Whistler from Vancouver was recently expanded for the Olympics and came in at a cost of about $1 billion. It's a very scenic drive, that's for sure!

This area is also known for it's native populace... the Squamish and Lil'wat nations. They have a great cultural center there that tells you everything you need to know about these indigenous peoples. Some of these Native Americans used reference points on their routes to help navigate long distances which are called "Inuksuks" (plural inuksuit).  That's what you see here.  According to Wikipedia, "The inuksuk may have been used for navigation, as a point of reference, a marker for travel routes, fishing places, camps, hunting grounds, places of veneration, drift fences used in hunting or as a food cache. The Inupiat in northern Alaska used inuksuit to assist in the herding of caribou into contained areas for slaughter. Varying in shape and size, the inuksuit have longtime roots in the Inuit culture."  This was also used as the symbol for the 2010 Winter Olympics.  This particular one is located behind the Roundhouse Lodge on Whistler Mountain.


All in all, the scenery is great there and the town has lots to do, but I'm not sure I would recommend anyone go there, at least right now.  Everything was expensive due to the weakness of the American dollar and the weather didn't cooperate for us.  Of course, it's hard to do anything about the weather.  We had two good days of skiing and two or three not so good.  As you can see in this picture, the clouds were below us, but that's also where some of the runs were.  So, it made it hard skiing through the fog.  The other thing is that there was a lot of rain while we were there.  Mostly in the lower elevations, but that didn't make it too fun either.  I imagine now that we're back, they are probably having wonderful skiing there!  Isn't that the way it always works?  However, we did like it enough to maybe go back in the springtime since the bears will be out and apparently they have some great springtime foliage!

Lastly, since  that's where we've been for the last week, that's what I mostly have pictures of now. So, the next few posts on this blog will be shots from there.  I hope that you enjoy them and I hope you enjoyed looking at and reading about this one.  Thanks for stopping by!
« Previous Post Next Post »