August 10, 2011  •  Leave a Comment
Last weekend was a new experience for us.  My wife and I took our nephew Dylan to the Monster Truck Jam at the Cedar Park Center in Cedar Park, Texas.   It's a nice little arena that seats about 6000 I think.  It was originally built for our local minor league hockey team, the Texas Stars.  But, they also have lots of other events there and it's only about 12 - 14 miles from our house.  Very convenient!  When the Monster Truck Jam came to town, we thought what a perfect thing to take our nephew to!  Plus, we had never been to one either!  Dylan thought it was "awesome!"  And, I must say, I thought it was pretty cool as well.  Seeing those trucks in person is a bit different than seeing them on TV or something.  I'm not sure Eileen was too impressed, but we all had fun anyway.

So the picture below is of King Krunch and Grave Digger!  I don't know much about King Crunch, but I HAVE heard of Grave Digger.  That truck is probably the most famous of all the monster trucks.  And, according to the announcer, this is the 16th version of this truck that the driver made himself.  Pretty incredible.  He was awesome!  However, and I don't know if this was fate or what, but right and the end of the show, Grave Digger was going through the freestyle event, which is where the trucks basically jump and pound stuff for a timed 1 minute, and right at the end, Grave Digger lost his right rear wheel.  It just broke off.  He was the last contestant and it was what closed the show!  Pretty cool!  Love a little mayhem!

That's about it!  We all had a great time!  The only thing is that the center was a little small for something like this, so it made it a bit cumbersome for safety's sake, but it was still a blast.  If you have a chance, check it out sometime! 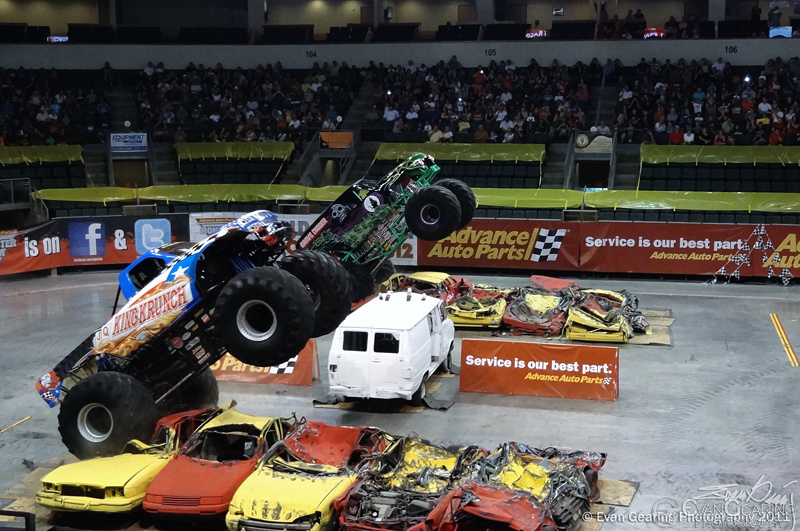