Everyone here in Austin, TX are getting pretty excited.  The new Circuit of the Americas F1 race course is now open and will be hosting its inaugural Formula 1 race.  If I'm not mistaken, event organizers expect upwards of 300,000 people to arrive from all parts of the world for all of the festivities.  We'll see how that bears out, but that's quite a few people.  What am I doing this weekend as if anyone cares?  I'm staying as far away from this as humanly possible.  The roads are expected to be horrendous, which means staying home and enjoying college and pro football on TV- American football that is - sounds like a much better option.  I'm not knocking those who want to go to the race, but I'm not up to all of the fighting it takes to get to and from the event.  Especially an inaugural one!  Let's get the kinks get ironed out on this one and then maybe a subsequent one will be more attractive.

So, in honor of the race this weekend, I thought I'd post another shot of a couple of Ferraris that were on display during the Formula 1 Expo held at the Austin Convention Center earlier this year.  Anyone know why Ferraris are also painted other colors than red?  See, doesn't red just GO with Ferrari?  I've seen others painted black, yellow, white, etc., but red is just perfect.  When I get my Ferrari, it will defintely be red.  Of course, that will be in another lifetime, but red it will be! ;-) 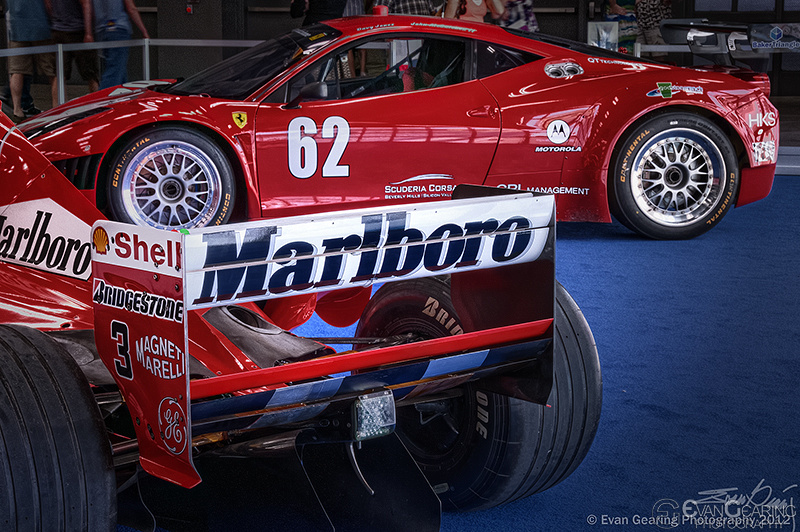