December 24, 2012  •  Leave a Comment
Well, 2012 wasn't as productive as I would have liked as far as getting out and taking pictures. However, I did get some nice ones from a few different places and I also tried some new things in 2012. So, since I didn't post a top 10 last year, I thought I would this year. But, I don't like to call them my "Top 10" per se, since that's hard for me to figure out. Not that they all could be "top tens".  I feel quite the opposite actually.  I like to think of them as my "Favorite 10" instead.  I know, it's really all semantics. So, here they are in no particular order:

(Also, if you want to check a really good top 10, check out Dave Wilson's here.  Blows mine away!)

Here's another shot I took at Dick's Classic Garage.  It is a 1929 Duesenberg Model J Bohman & Schwartz.  It is a little different from other "Dueseys" because of the headlights.  This one has smaller headlights, but overall it's still a classy looking ride.  I really liked the front of it so I tried to capture it on an angle and make it dramatic, or at least a little different.  I hope it worked. (Click the photo for a larger view) 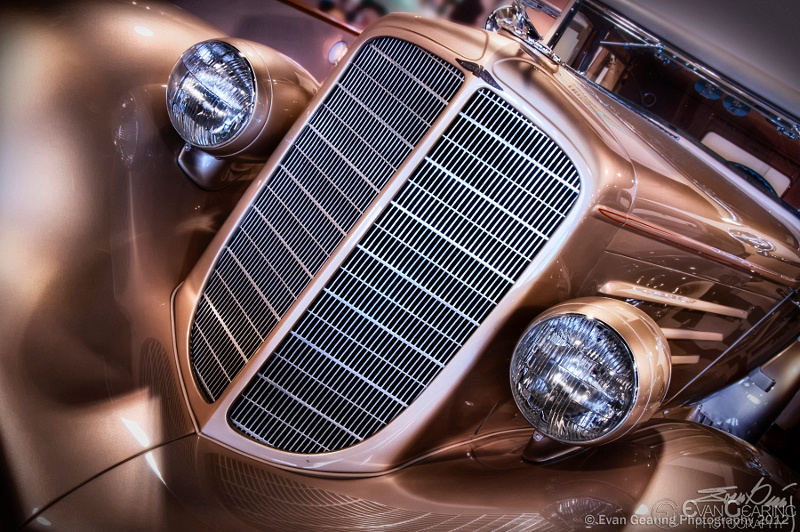 Garden of the Gods #2
The National Natural Landmark known as "Garden of the Gods" is a must see on any visit you may make to Colorado.  It's full of beautiful sandstone outcroppings and there are plenty of hiking paths and roads to see everything the park has to offer.  Located in Manitou Springs just outside of Colorado Springs, its a wonderful place to see nature at its best!

Th shot below shows what you can do with HDR...  The light was terrible.  I was shooting into the sun and the sky was very hazy at the time.  But, with 7 brackets, a little processing with Photomatix and some tweaking with Nik's Color Efex and Viveza, I was able to bring out some of the detail from the haze and the shadows to present something a little more interesting than just the original snapshot.  Do you think it was worth it?  I would love to hear your thoughts if this looks good, if it looks over done, or if it looks OK.  Either way, I can take it! ;-) 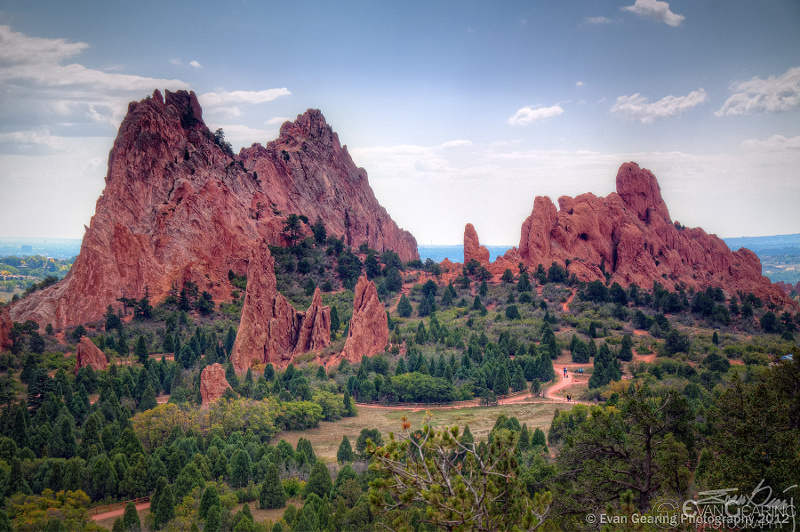 Peyton Manning (Oakland v Denver, Sept. 30th, 2012)
Here he is! Peyton Manning!  He's one of the big reasons we went to Denver.  He's a great quarterback and ever since he's had problems with his neck in recent years, we never really knew if we'd get a chance to see him play.  So, when the opportunity arose, we jumped on it.  We were even able to score some pretty decent seats... 6th row in one of the end zones!  Nice place to see a game and to take a few shots.  This one here is one of the better ones I was able to get.

According to things I've read about getting football shots, if you get a face and the ball in the shot, then it should be good.  Well most of the shots I got didn't have either.  I realized it's not easy to shoot football games, especially from the seats.  However, this is one of the few shots that had both a face and the ball in it.  It's not the greatest shot in the world because I would've preferred to see Peyton's number 18 as well, but overall it's not too bad.  Here, Peyton's throwing the ball to the running back, Lance Ball, number 35, for a touchdown. 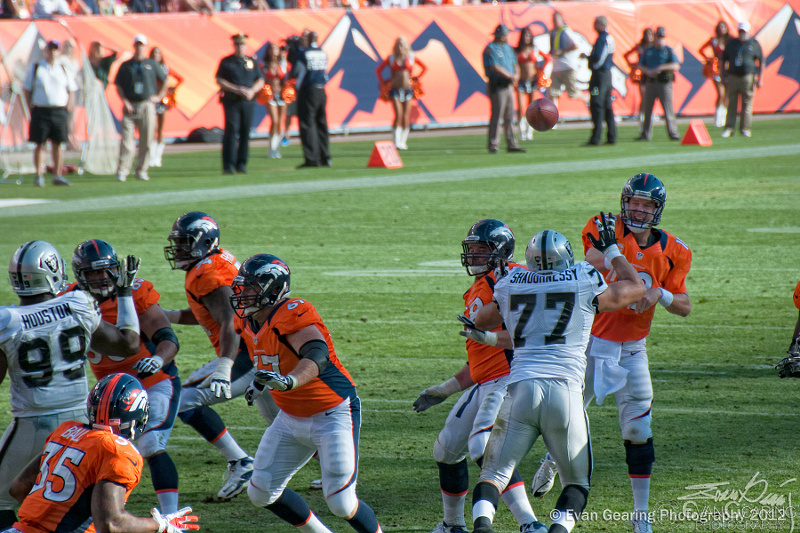 Last weekend we went to visit friends down in Aransas Pass, TX.  They have a boat down there that they invited us to stay on.  Unfortunately the weather didn't cooperate enough for us to be able to go out on it.  t was just too windy.  However, that's not to say we didn't get to ride on a boat at all.  We took the ferry from Aransas Pass to Port Aransas.  It was a short ride, but it was windy as well.  The funny thing was, as we started out across the channel, we decided to get out of the car and go to the front of the ferry to watch the dolphins.  There was a small pod of them swimming about.  Pretty cool!  However, the further out into the water we got, the bigger the waves became.  They started lapping over the front of the ferry.  I and my camera got a little wet on the first one, so I turned around to head back to the car.  As soon as I did a bigger wave crashed over the front and soaked my back.  Luckily the camera didn't get very wet as my back blocked most of the water.  But, my wife Eileen and her friend Sandy decided to stay and they got completely soaked!  It was hilarious!  Sandy says we got "baptized".  I should've tried to get a shot of them at that point, but alas, I wanted to make sure the camera was OK and get out of anymore possible soakings.  So, while in the car, the security guy came around to check everything and I thought that would be an opportunity to shoot SOMETHING.  I got more of the camera in focus than the security guy, but I still think the shot is kind of interesting.  Do you? 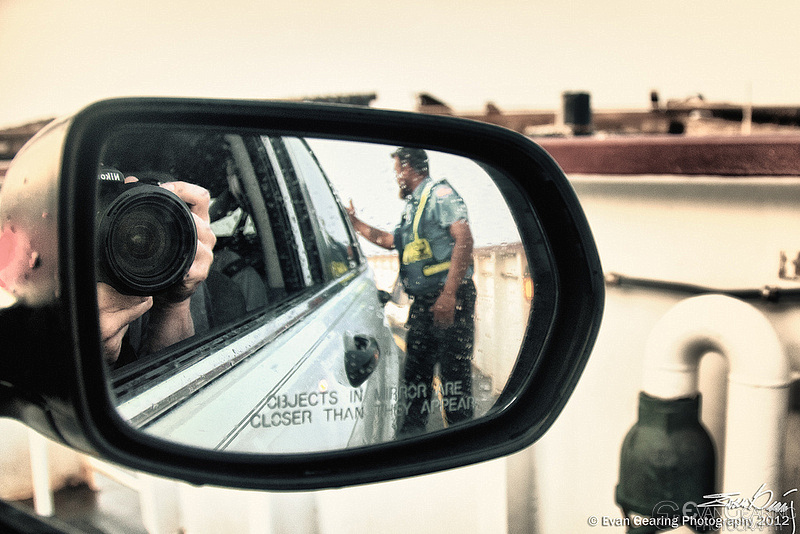 Hey, I didn't name it! ;-)  It may be politically incorrect, but who cares, right?  Anyway, this is one of the many different rock formations at the Garden of the Gods.  This one is kind of off the beaten path, but I think it is one of the more interesting formations to see there.  Also, just behind it lies Pike's Peak way off in the distance.  I should've tried to find an angle with both of them in the shot, but I'm happy with this one. 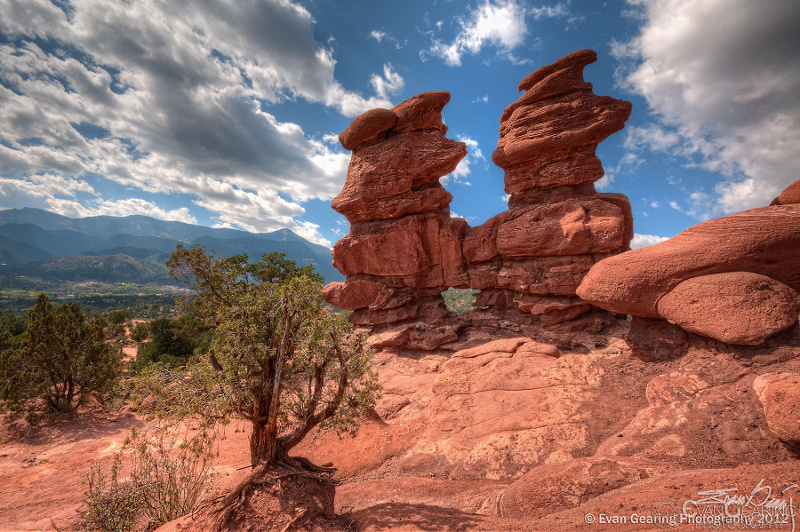 This it a shot I took a few minutes before Michigan-Alabama game at Cowboys Stadium as the University of Michigan Marching Band was on the field.  I took this with my new fisheye lens as you can see.  It's pretty fun to play with!  It's nice to get a whole panorama interior shot of a sports stadium without having to take 7-8 separate shots and try to blend them together.  I did notice that there is a little bit of purple fringing around some of the lights so I guess I'll need to be conscious of that in the future. 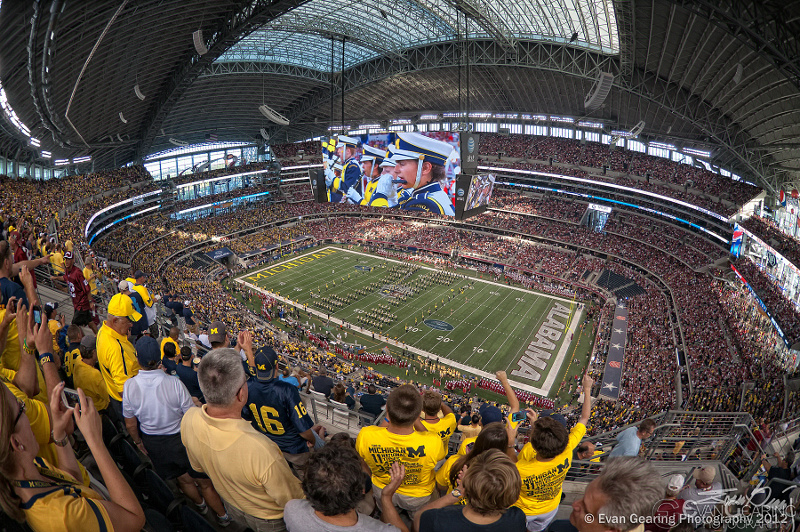 Door Ringing at the University of Texas

Below is a picture of Alex Suarez's son that I took during one of Alex's photowalks at the University of Texas. 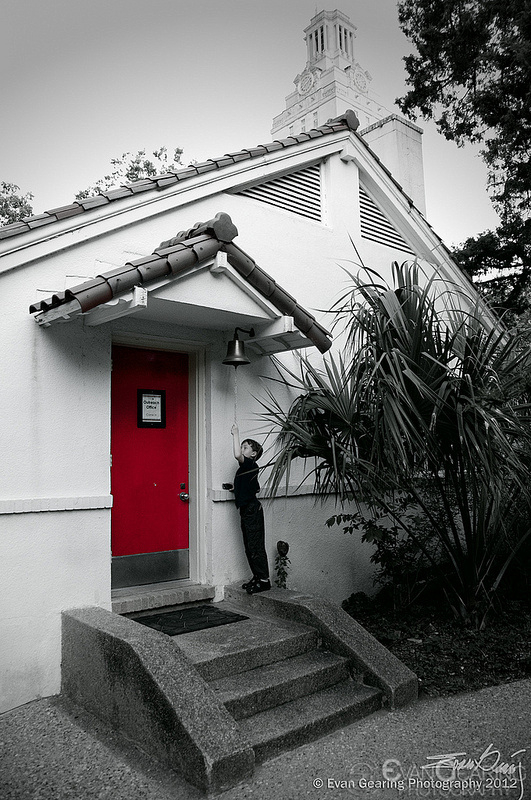 This is an HDR that I converted to a monochrome.  I tried to "Ansel Adams" it up a little even though I think he did mostly black and whites.  Something about shooting mountains and clouds that just calls for either. 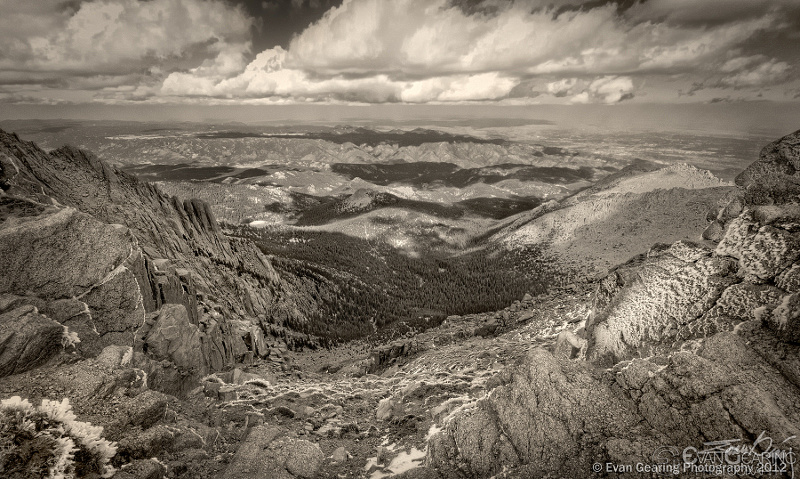 Wouldn't it be cool to be able to click a button in your car and move into "hyper-drive" or "warp-drive" to get to work if you were running late? I'm not usually late for work, but there are times when I would like to leave a few minutes later than usual, but yet get to work on time.  That was sort of the inspiration for this shot. 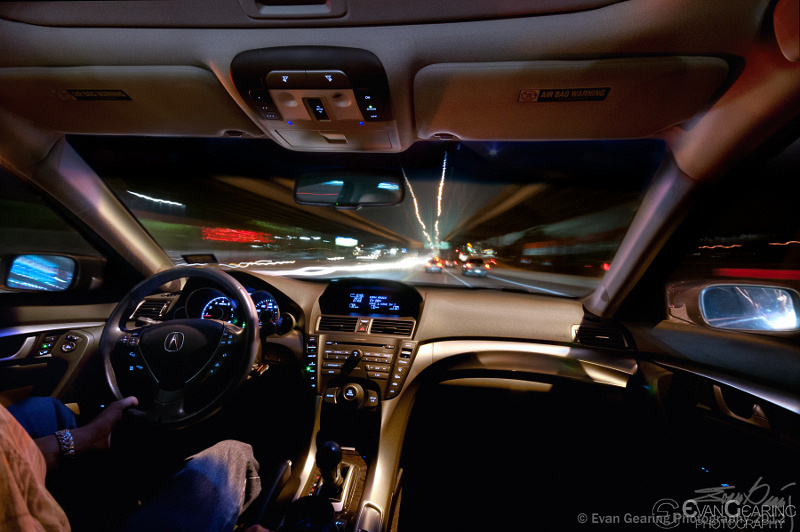 I spent a few minutes on the 1st St bridge getting a shot or two of the Austin skyline and the lake.  Here it is...  Luckily, I think this one turned out nicely after a night of letting it cook. 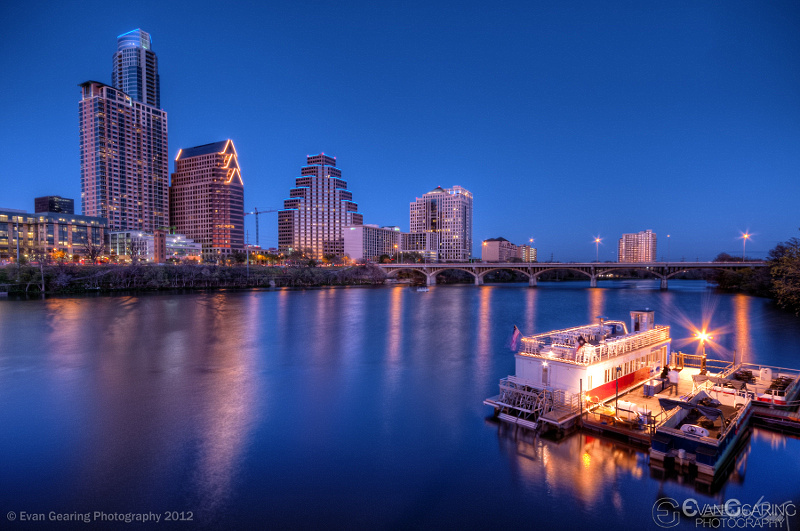