April 25, 2012  •  Leave a Comment
This is a shot I took from the top of the Empire State Building in New York City a few years ago. Everyone who goes up there gets this shot, if they have a camera that is. However, I wanted to do something a little different with it. So, I thought I'd miniaturize it. Read below how I did that. 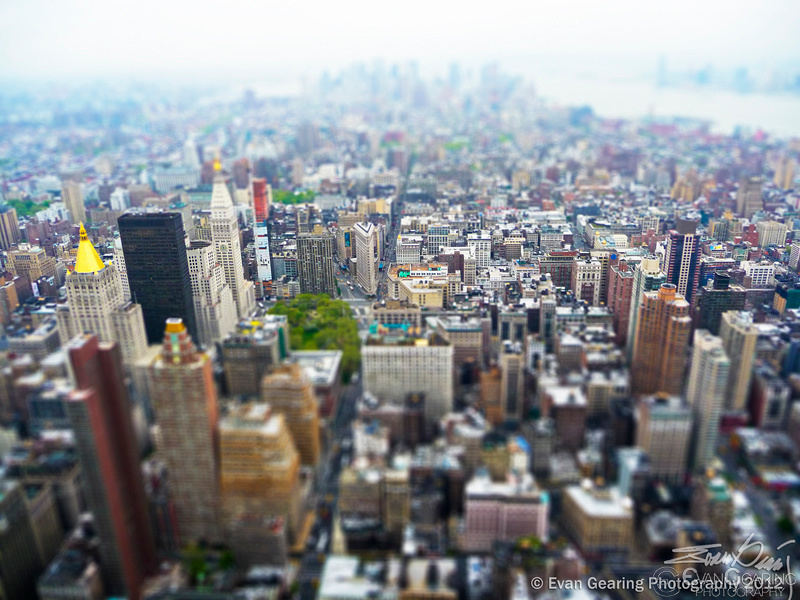 One cool effect that seems to be getting more and more popular is the "miniaturization" effect you can get from tilt-shift lenses.  The effect can make subjects such as landscapes or cityscapes taken from above look as though they are much smaller, like you were looking at say, a miniature mock-up of a city on a table.  Kind of like if you had a toy train set and took a picture of it with your aperture wide open.  It's an effect I've been wanting to get for a long time.  As a matter of fact, the new Canon PowerShot S100 has this effect built-in.  It's a camera I've been looking at for a while now and that I would like to get. I could use it as an addition to my Sony DSC-HX9V (longer zoom than the S100) and as a backup to my Nikon D300s due to the S100's many controls such as aperture and shutter priorities, raw file capture and many other effects.  Ah, I can keep dreaming.  Anyway, until that time comes, I wondered if there was a way to get the miniaturization effect in Photoshop.  After a bit of research and tinkering, I have found out how to do it.  It's not too hard, but you do need to know your way around Photoshop a little bit. 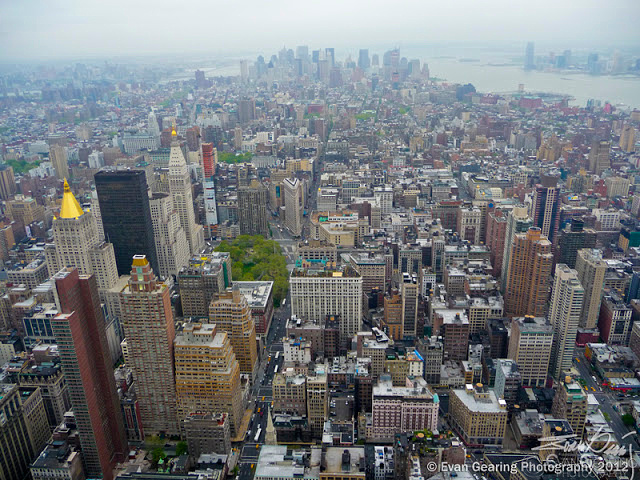 Open it up in Photoshop and click the letter "Q" for the Quick Mask. 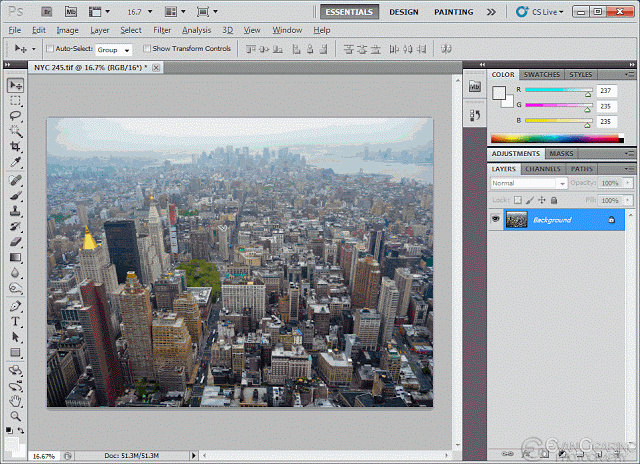 Then select the "Gradient Tool" as seen below:

After you select the "Gradient Tool", go the the toolbar just below the menu bar and select the "Reflected Gradient" as seen below:

Now, here is where you select the area that you want to keep in focus.  At this point your cursor should look like a little pointer or dot on the screen.  Select the point you wish to be in focus and draw a line straight up.  I picked the "Flatiron Building" in the middle of the shot below.  It's kind of hard to see, but the line is there. 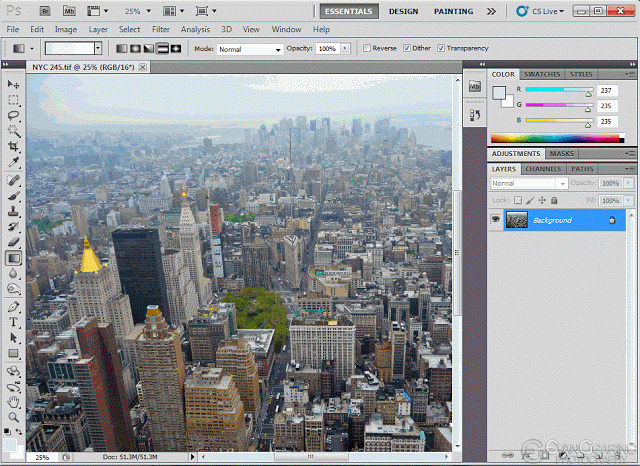 After the line is drawn, you should see an area in the middle of your photo shaded in red as seen below: 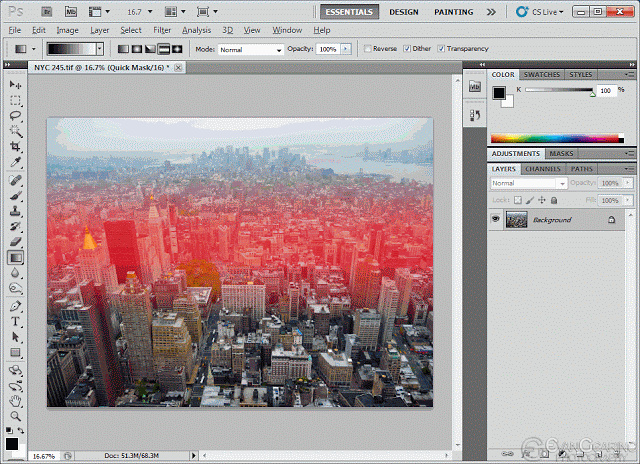 Now, hit the "Q" key again to get you to selection mode and you should see two boxes of "marching ants" as seen below: 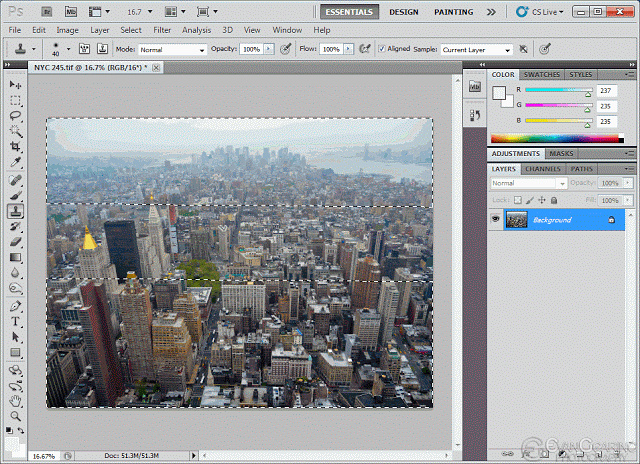 Go to Filter | Blur | Lens Blur so you get the Lens Blur window.  Start playing with the sliders until you get the effect you want.  I basically took the Radius slider and raised it from 15 to about 37.  That's all I fussed with and then I hit the "OK" button: 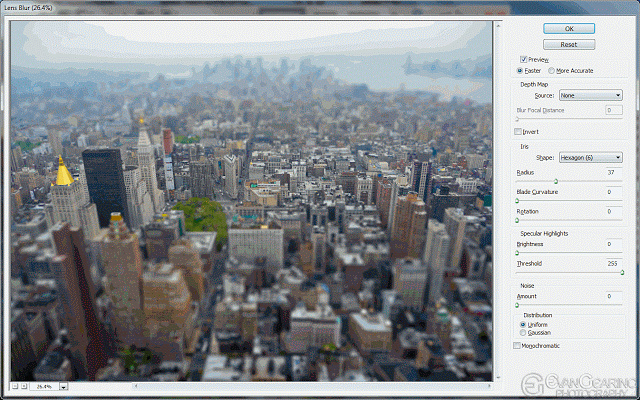 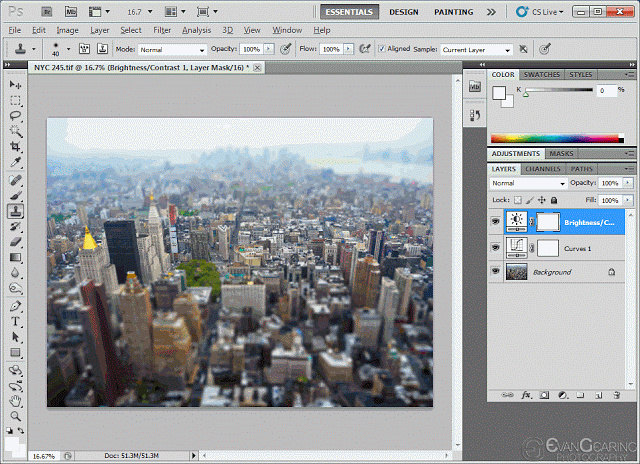 Then I flattened and saved the image.  That's it!

Again, that's all there is to "miniaturizing" something.  It's lots cheaper than a tilt-shift lens or a new camera with that effect in it, don't you think?  I hope to get some more shots some day to try it out more.