May 09, 2012  •  Leave a Comment
Last weekend we went to visit friends down in Aransas Pass, TX.  They have a boat down there that they invited us to stay on.  Unfortunately the weather didn't cooperate enough for us to be able to go out on it.  t was just too windy.  However, that's not to say we didn't get to ride on a boat at all.  We took the ferry from Aransas Pass to Port Aransas.  It was a short ride, but it was windy as well.  The funny thing was, as we started out across the channel, we decided to get out of the car and go to the front of the ferry to watch the dolphins.  There was a small pod of them swimming about.  Pretty cool!  However, the further out into the water we got, the bigger the waves became.  They started lapping over the front of the ferry.  I and my camera got a little wet on the first one, so I turned around to head back to the car.  As soon as I did a bigger wave crashed over the front and soaked my back.  Luckily the camera didn't get very wet as my back blocked most of the water.  But, my wife Eileen and her friend Sandy decided to stay and they got completely soaked!  It was hilarious!  Sandy says we got "baptized".  I should've tried to get a shot of them at that point, but alas, I wanted to make sure the camera was OK and get out of anymore possible soakings.  So, while in the car, the security guy came around to check everything and I thought that would be an opportunity to shoot SOMETHING.  I got more of the camera in focus than the security guy, but I still think the shot is kind of interesting.  Do you?

Let me know what you think and thanks for dropping by.  (Click the shot for a larger version.) 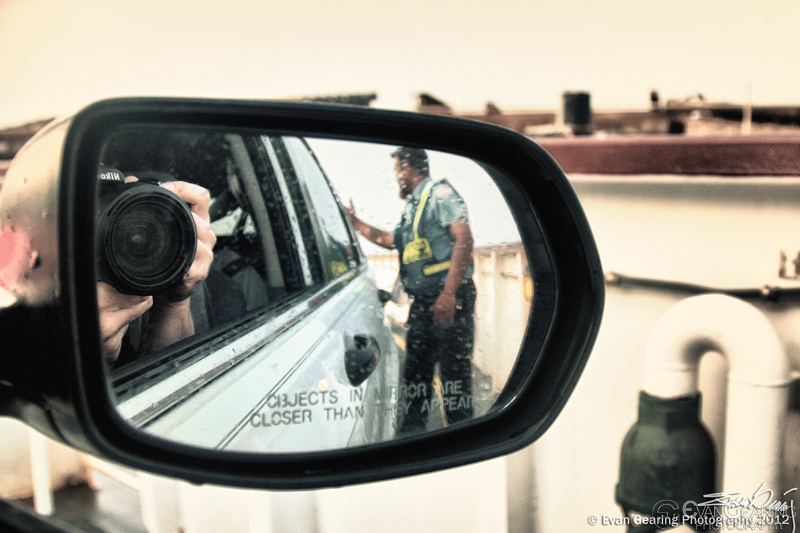