June 26, 2012  •  Leave a Comment
If you read my last post, you'll know that my wife and I went down to San Antonio last Friday night to see Van Halen play at the AT&T Center.  It was a great show and I think I got some OK shots of the band.  Another type of shot I like to get whenever we go to a venue such as this is a panorama.  This is the first time I've taken one at a concert.  Usually I get shots from football or baseball stadiums.  Not this time.  I took this shot from our seats after Kool and the Gang played and before VH took the stage.  You can see that on the stage the road crew is removing the last of the drum risers from Kool's set and prepping for VH to take over.  I thought it was a good time for a shot.  I tried working one during the shows, but they really didn't turn out.  Click the shot below to see a larger version. 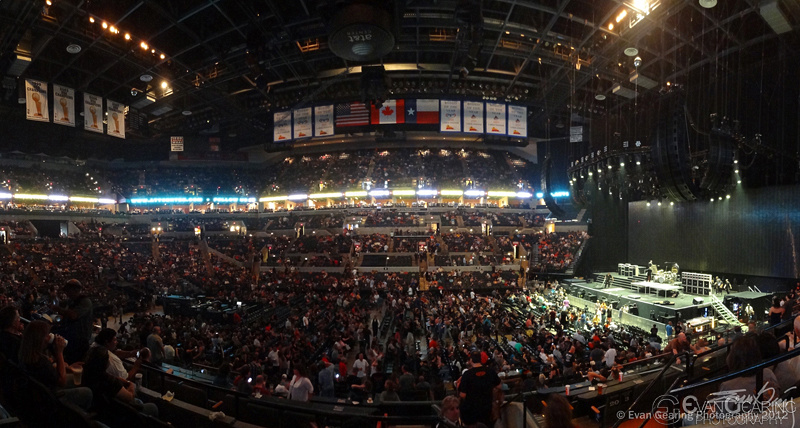 The camera I used for this was my little Sony DSC-HX9V compact point and shoot.  It has a built-in Panorama mode that makes taking these shots a snap.  They turn out pretty good also.  However, the shots come out VERY wide and NOT VERY tall because you can only do these shots with a landscape orientation.  That's what panorama's are supposed to be, right?  But, I like my panos to be a little taller to capture more in the shot. They usually end up with a fish-eye effect. So, instead of letting the camera do the work, I flip it to a portrait orientation and take several shots, being careful to make sure each one overlaps a little bit.  Then I stitch them together in Photoshop's "Bridge" using the Tools | Photomerge function and taking the defaults after that.  Wa-la!  It's a little more work, but I like the results a lot better.  Click here if you would like to check out some of my other panos.  (Sung to Van Halen's "Panama") "Pan-o-ram, dun duhhh, dun-deh-dunn, Pan-o-rama!!"  Yeah, that's bad..  I know...
« Previous Post Next Post »