June 21, 2012  •  Leave a Comment
As you can see from the recent shots I've posted from the Formula 1 Expo, you could say I have a love affair with the Ferrari automobile.  What red-blooded male wouldn't?  That's like a fantasy car for most of the human race!  One of the reasons is because of the great V12 engines they put in those cars!  I mean, seriously?  Just to drive around in?  Man, I'd love that!  You know what would be cool to do?  Maybe put one of these babies in a Toyota Prius!  Then blow the doors off of just about anyone on the road.  Well, that'll never happen.  If you can afford the engine, you can probably afford the body that it should go in.

I must say one thing about this particular engine, however... It was in a white Ferrari on display at the show and I've got to say, it looked like some sort of hatchback or something.  I don't know the model of it, but I can't say it had that classic Ferrari look to it.  Oh, I'd take it if someone gave it to me, but not sure I'd buy it if at all possible..

Anyway, I hope you enjoy the shot and thanks for dropping by... 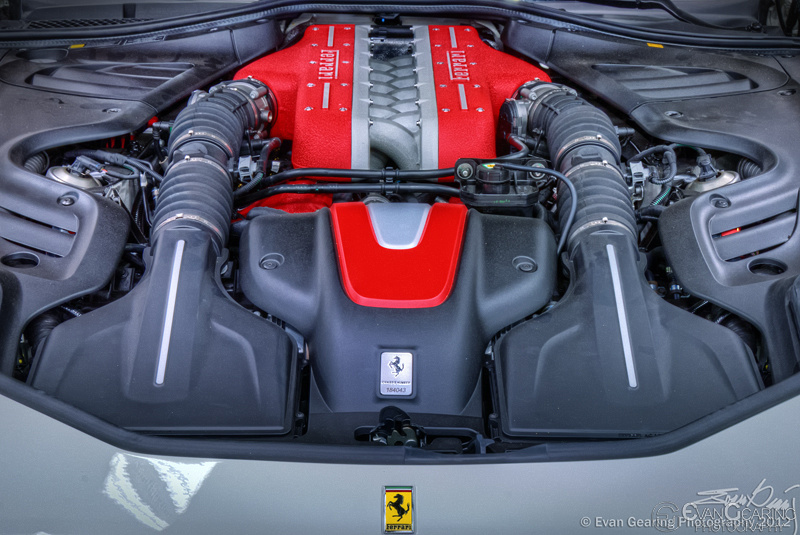 UPDATE: I just found out from looking at Top Gear's 50 Shades of Grey page that this is from a Ferrari FF.  Kind of a goofy-looking car for a Ferrari, wouldn't you say?  I'd still take one though if it was given to me! :-D
« Previous Post Next Post »