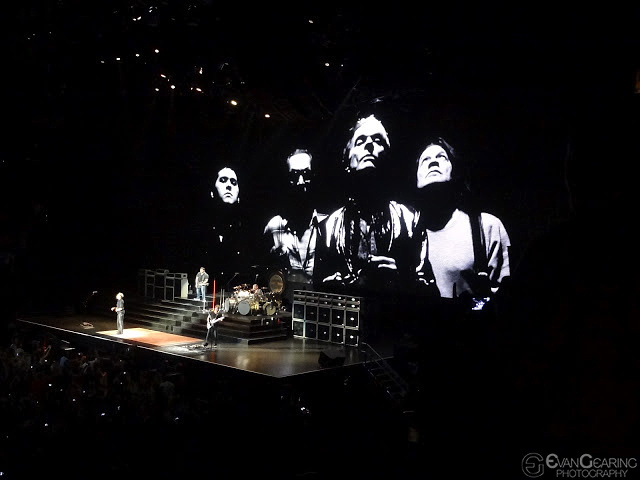 My favorite rock band in the world, Van Halen (along with special guests "Kool and the Gang"), played at the very hot AT&T Center in San Antonio on Friday, June 22nd. I couldn't wait to go for a couple of reasons... As I stated before, they are my favorite band and the other reason is that the band does not mind at all if you want to bring a camera.  As a matter of fact, David Lee Roth stated in a video on their website that, "If you can carry it in, you can bring it!"  However, the AT&T Center has a policy that cameras with detachable lenses are not allowed.  Otherwise, they have no problem either.  I brought along my little Sony P&S, but a new ILC with an APS-C sensor and a decent zoom would've been perfect.  You could stuff those into the pockets of some cargo shorts and you could get some awesome shots, even if it is a detachable lens camera.  You see, security didn't frisk for a change, so it would've worked.  But my little camera did a pretty good job, so those are the shots you see here; straight from the camera no less, with no post-processing other than either cropping or lens corrections.  Give it try sometime!  I also want to pass along my thoughts of the show as well.  So here we go!

It was a typical VH show in that all of the guitar virtuosity of Eddie along with the showmanship of Diamond Dave were on display just as the rock gods intended!  VH didn't have the pyrotechnics one would see at say a KISS concert, but those weren't needed.  Their talent provided all the fireworks and man, were there fireworks! 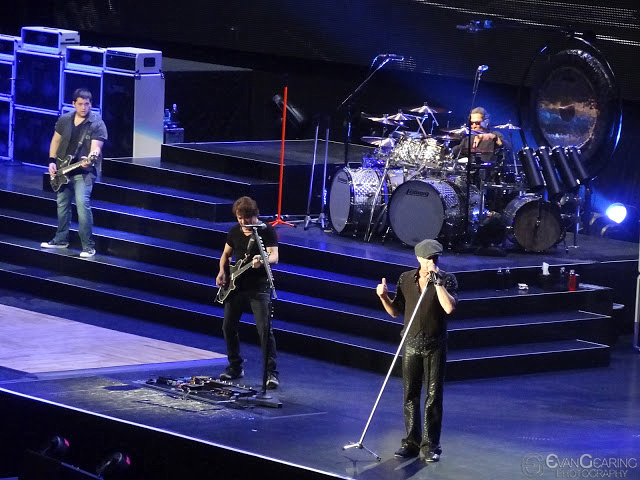 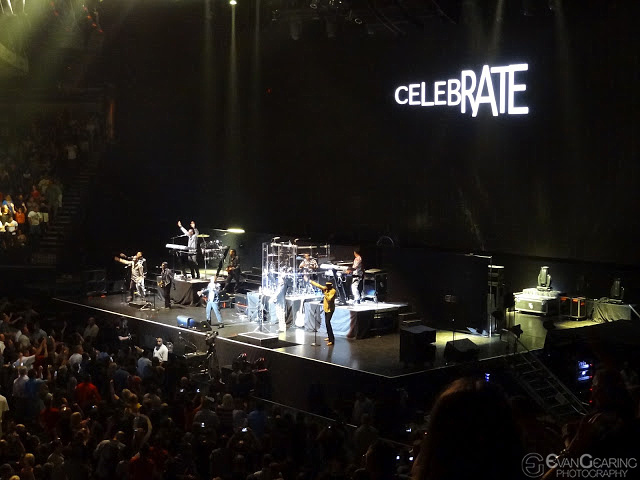 The crowd got warmed up with a raucous performance by opening act, "Kool and the Gang".  I originally thought that was a weird pick as the opening act for a huge rock and roll band, but "the Gang" really got the party started.  Not knowing many of their songs, I really had no idea what they opened up with.  I'm guessing it was some pretty new stuff.  It had a great beat and watching about 10 or so guys on stage grooving and dancing was pretty fun.  The crowd sort of liked it a bit, but I got the feeling they were just trying to be polite.  Then, as the lead singer said, they went "back to the '70s" and busted out some old hits such as "Ladies Night", "Get Down On It", "Jungle Boogie" and ended with the crowd favorite, "Celebration".  I was skeptical when it started, but at the end of their set the whole venue was jamming with them!  Those guys can put on a show!  It turned out to be a great idea having those guys open and I'm glad I saw them!

After a quick removal of "the Gang's"stuff from the stage, it was Van Halen's time.  Back when I saw them in the 1980's, there would be a PA announcer that would introduce the band by screaming, "Ladies and gentlemen, please welcome THE MIGHTY... VAN HALEN!"  I was ready for that announcement this time!  Instead, the lights dimmed, the crowd roared and Alex Van Halen took his seat behind the drums and fired away with a machine gun-like assault of epic proportions!  Then we heard a high-pitched squeal and some rapid fire notes coming from Eddie Van Halen's guitar as he, lead singer David Lee Roth and Eddie's son Wolfgang Van Halen took to the stage.  It wasn't the same intro as I remember, but it was awesome in its own way.  After about 30 seconds, they jumped into perhaps the best opening song they have in their catalog with "Unchained!" 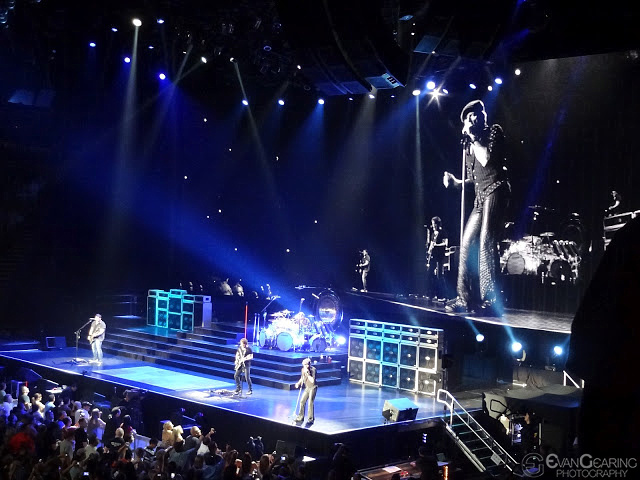 The show just got better from there.  After "Unchained", the boys played "Running With the Devil" with Wolfgang banging out the opening notes while standing on the riser to the left of the drums.  This is something that the previous bass player, Michael Anthony used to do with his teeth, but to be honest, I didn't miss that.  Wolfie did a great job filling Anthony's shoes throughout the whole show that dare I say, I think he's a better player at the age of 21 than Anthony is in his 50s.  I guess the music gene is well ingrained in this next generation of Van Halen. 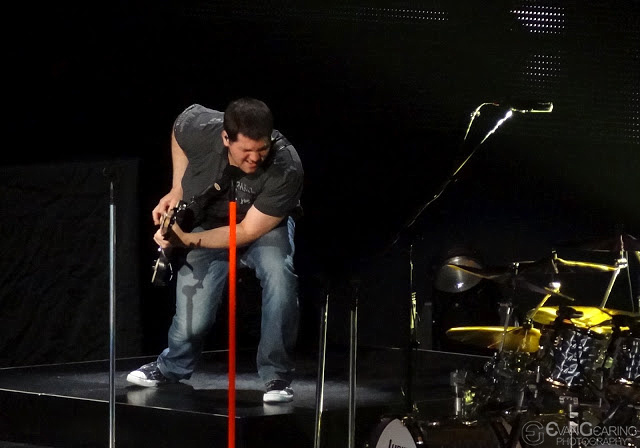 After "Devil", they played a song called "She's the Woman" off their new album, "A Different Kind of Truth".  It's a good song, one that you can tell was written in their heyday, but to me isn't the best one from that album.  However, it was still fun to watch them play it!  During the night they played three other songs from the new album as well; "Chinatown", "Tattoo" and "The Trouble With Never".  I must say, I like them all OK, but if they would've played "As Is", "Outta Space" or "Stay Frosty", I would've been ecstatic.  Oh well, can't have everything. They are probably saving those for the next leg of the tour. 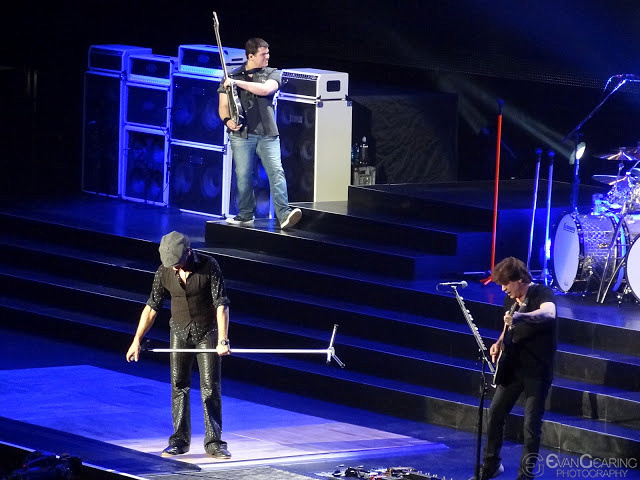 The rest of the setlist included stuff from the first six studio albums with Roth, thank God!  No Hagar material on this tour!  Whew!  The other songs that they played were as follows, but in not any particular order:

At least those are the ones that I can remember for sure.  You know, at my age, if I don't write stuff down, I might lose it after a night of sleep! 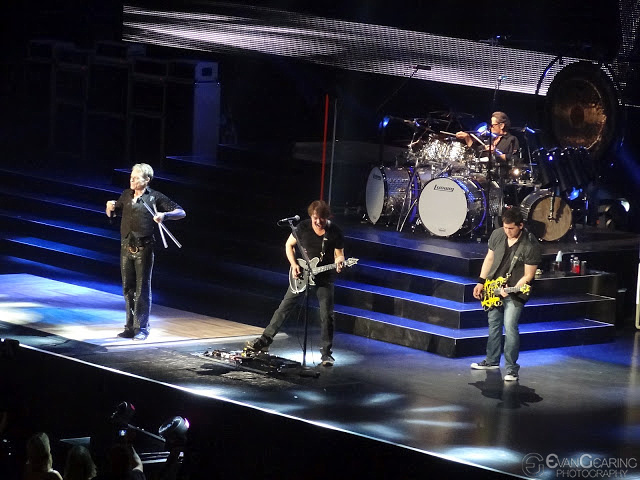 As good as the band members are when they play together, each of them other than Wolfie had his own moment in the spotlight.  The first was the drum solo by Alex.  He showed that he's as good a rock drummer as any out there.  Not necessarily better than some, but as good as for sure.  And it really wasn't a typical solo because he played with some jazz-like accompaniment.  His solo was good and it was quick. It only lasted maybe 3 or 4 minutes.  One thing that always cracks me up about drum solos, no matter who the band is, when they start, there's always a mass exodus for the bathrooms.  This solo was no exception.  Kind of funny to see that.  Better to miss some drumming than a certain song, I guess. 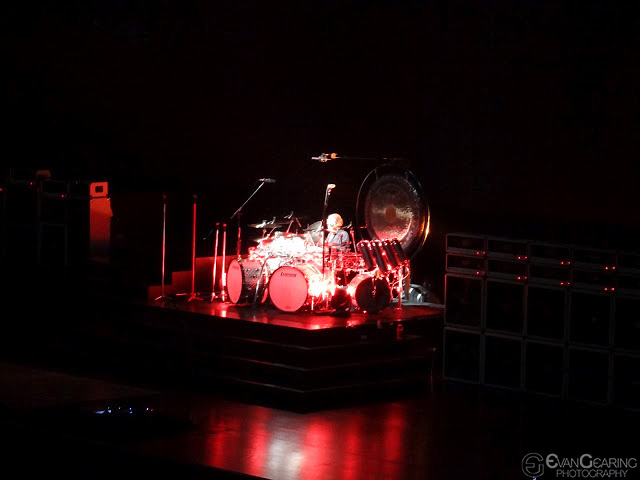 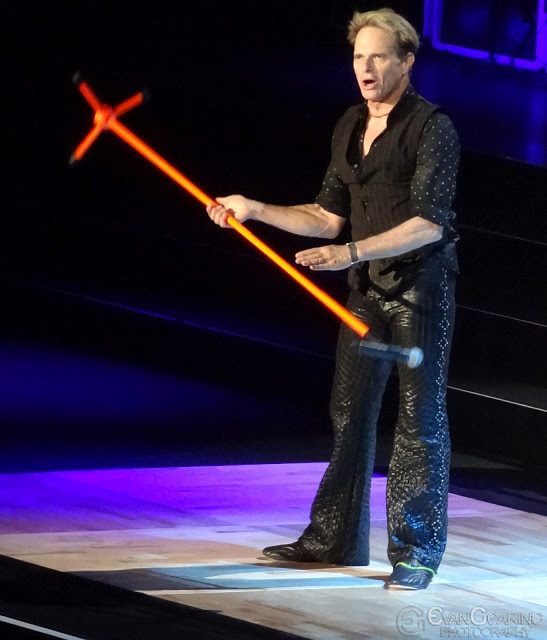 The next "solo" was by lead singer, David Lee Roth.  He plays the acoustic guitar during the opening bit of "Ice Cream Man".  Before this song, Dave came out with a guitar while the massive video screen behind the stage showed some black and white clips of Dave with his two herding dogs, Mike and Bennie. At least I think that's what he said their names were.  Anyway, he spoke about going to different shepherding competitions and the logistics of those.  He also spouted off some great one-liners.. One was, "Nothing like two dogs in a pickup to get that new car smell out!"  That cracked me up!  They then rocked into "Ice Cream Man"! Fantastic! 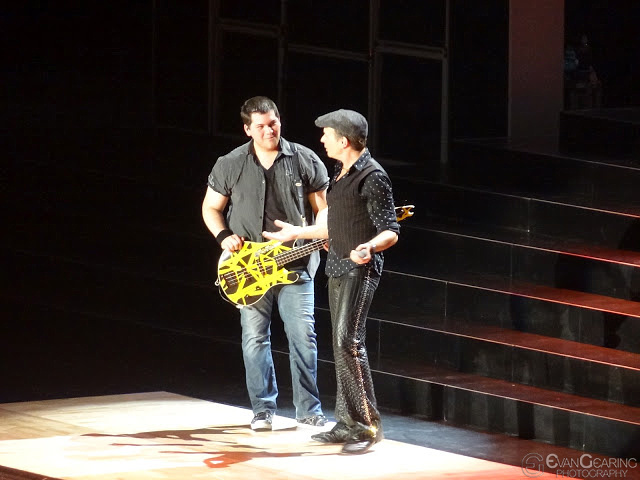 Speaking of one-liners, during one point in the show, Dave gave Wolfgang a little advice about women.  While gearing up to play "Everybody Wants Some", Dave said to Wolf not to do what he did when he was in San Antonio a long time ago.  He said he had a girlfriend named Evelyn.  One night when he took her to dinner, "I meant to say to her, 'Honey, please pass the salsa', but what I accidentally said was, 'Bitch, you f***ed my whole life up!'"  He brought the house down with that and I was rolling!  Wolf was laughing and so was Eddie!  It was hilarious! Check it out... Dave even said that was "the first time he introduced a song properly" on this tour.  Usually one can't believe Dave when he says these kinds of things because he has a certain schtick for every show, such as forgetting the words and so on.  But, I believed him this time!  It was great! 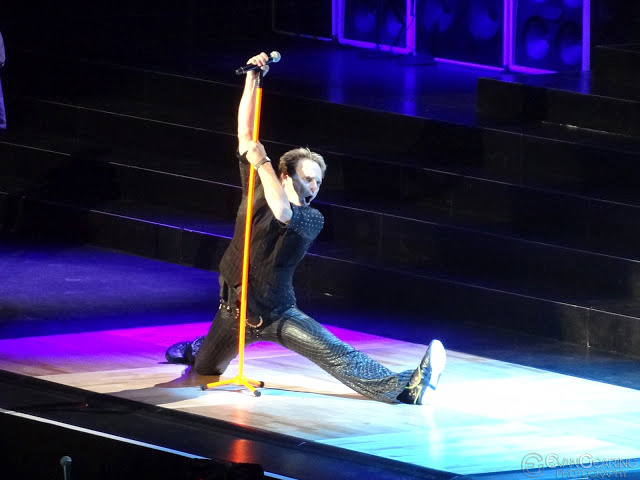 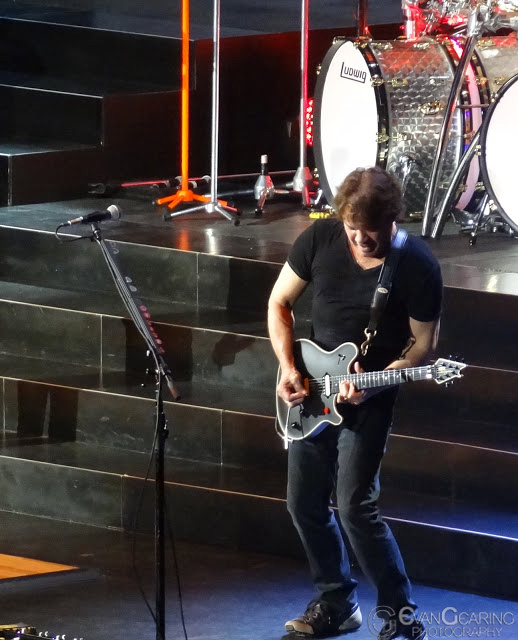 Finally it was time for Eddie's guitar solo.  Prior to this tour, Eddie used to drink before every show.  It helped him get over stage fright.  He recently said it started when he was 12 years old when he asked his dad what to do to get over feeling nervous before going onstage.  His dad gave him a shot of vodka and the rest is history.  Well, this tour is the first one he's doing totally sober.  And, it showed in his playing, especially his solo.  He practically burned up his guitar with his "patented" two-hand tapping technique, a flawless version of "Cathedral" and the crowd favorite, "Eruption."  I think he is faster on the guitar now in his late 50s than he was in his 20s.  I guess that's what alcohol will do.  Also, when it came time for Eddie's solo, the arena seemed like it was 90 degrees in there.  My wife and I and probably the rest of the crowd were burning up.  However, we didn't mind and it didn't look like it affected Eddie during his solo or the rest of the band during the show.  Thank goodness!

After Eddie's solo, the band went into one of my all time favorites, "Ain't Talkin' 'Bout Love".  This song is just meant to be played live, from the guitar intro to the main riff and to the crowd-rousing "Hey, Hey, Hey's" just before the coda, you just can't beat it!

The last song they've typically played during this tour has been "Jump" and that was no exception during this show.  "Jump" is not a big fave of mine, so we left when it started to beat the traffic.  I was OK with that.  I don't know if they played anymore after that, but I highly doubt it!  I saw everything I wanted to see!

I saw Alex Van Halen tear up the drums and hold his own as one of the most solid drummers in rock history.  I saw a new up and coming/very talented bass player in Wolfgang Van Halen, who from what I understand can play other instruments just as well.  I saw Diamond David Lee Roth strut up and down the stage with his cock-of the-walk assured-ness that just commands the stage as well as all of his dance moves, kicks and comic one liners that should keep his reputation as "Entertainer-In-Chief"  of all of Rock and Roll (I made that up :-)) totally secure, even if he can't quite sing songs live like he does in the studio.  And lastly, I saw probably the most innovative guitarist in rock and roll history since Jimi Hendrix play better than he's played in decades.  And sober!

It's been 28 years since I've seen this line-up and I can't believe it's over.  If there were any lingering issues between Dave and the rest of the band that broke them up 28 years ago, I could not see it on this night.  I hope it lasts and I hope they keep entertaining me and all of the other fans out there for years to come!  Now I can't wait for the 4th of July although Van Halen should be the the show on the National Mall along with a little fireworks show. But, rumor has it that they will be the halftime show at the Super Bowl.  We'll see!

One final thought I want to pass along to all of you has to do with my wife Eileen..  She really didn't want to go to this show, but because she knew I wanted to go so badly, decided to go with me!  She is the best thing that ever happened to me and I'm so lucky to have her.  Thanks for coming along honey and I hope you enjoyed yourself a little bit! I love you!

Update: I just read from the write-up at http://www.examiner.com/review/van-halen-kool-the-gang-celebrate-a-different-kind-of-truth that the reason it was so hot in there was that the air conditioning malfunctioned during "Kool and the Gang's" set.  No wonder! I thought it was Eddie's playing! ;-)