Well, I finally went and did it.  I decided to stop taking pictures.  That's right.  I'm done!  Most of you out there are probably thinking, "Thank goodness!  His stuff sucks, anyway!"  Well, hold on.  I'm not through yet...  I've only stopped taking pictures... temporarily!  Ha!  Gotcha!  It's gonna be a slow New Year starting off as far as picture-taking goes...

So here's the story.  Back in October when I was taking pictures of the balloons at the Georgetown Airfest, I accidentally dropped my camera!  Ouch!  Luckily all that was damaged was the control panel LCD on the top and my pride.  Everything else worked fine.  As a matter of fact the LCD worked pretty well, but it had a large black spot in it on the lower right side.  Well, it started getting worse so I finally took it to Precision Camera to see what they could do.  Sounds like they can replace it quite reasonably.  I just hope it's reasonably soon because I have some plans coming up where I'll really need it! They said a "few weeks", but I'll need it in a "few weeks"!  Fingers are crossed! Of course, if I make a few more sales from my gallery, I'll be sitting pretty for a new full-framer!  I'm close now, but just not quite ready to pull the trigger.  Anyway, I'm not totally done taking photos yet, only temporarily. So, if any of you out there are just dying for some excellent prints to dress up your walls, stop by my gallery and order to your heart's content!  Help a brutha out! ;-)

In the meantime, I'll try and post some photos I've taken over the years that haven't made it to the blog yet and I'll also try to post some other interesting little tidbits about this and that.  Hope you don't mind.

I always feel a little funny about promoting my work because it seems so arrogant or self-centered, like I'm bragging or something.  But in order to make money and get my name out there, that's what I have to do.  Or that's what anyone with their own hobby/business has to do, right?  So, here's a little something that was written about my work...  Sebastian St. Troy, a colleague of Austin real estate agent Shannon Schmitz, posted a very nice write-up about my work on their blogs, "Shannon Knows Austin Real Estate and Fine Living" and Austin Fine Living Magazine.  Not sure everything they say in there about me or my work is true, but I'll take it! ;-)  Thanks so much, Sebastian and Shannon!  And, if you need some real estate help in the Austin area, I'm sure they will be a great help!  Check 'em out!

So this is a shot I took back in September/October when we went to Denver.  Yes, another Denver shot!  Sorry, but I have quite a few of those left. :-)  This is when we went to the Raiders v Broncos game on Sept 30th.  It was awesome!  We had great seats and Denver kicked the Raiders collective butt!  This shot is a tad bit out of focus, but I like it nonetheless!  I thought I'd add this one since the Broncos not only made the playoffs with Peyton's help, but they're the number one seed in the AFC!  That means home-field throughout!  I think Peyton should be the MVP this year!  A lot of people think Adrian Peterson of the Vikings should be which is a valid argument, but Peyton makes everyone on his team better!  I don't think Adrian does that! Oh, and Peyton is handing-off to Willis McGahee in this shot.... 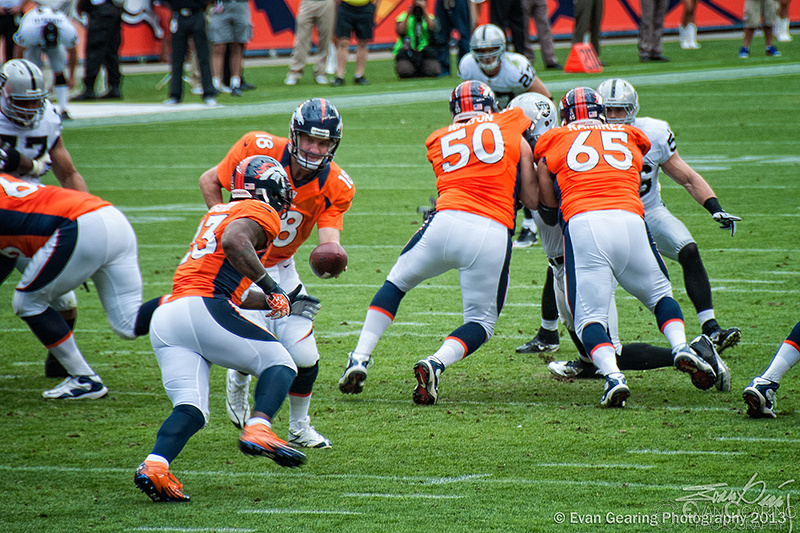