Super Bowl Weekend! Woohoo!  It's always exciting to watch the two best teams in the NFL play for the ultimate prize. There's nothing like American football, no?  It's the best!  However, this year, I'm not really too enamored with either team vying for the bragging rights of "Super Bowl Champions!"  The Niners are OK because they have a good coach and their young quarterback is fun to watch.  Other than that, meh.  The Ravens on the other hand are aging, have a good coach as well as a good defense led by someone who was accused of being involved in a double-murder a few years ago.  Again, meh.  When all is said and done, I will probably root for the Ravens because their head coach - John Harbaugh - is the older brother of the Niners head coach - Jim Harbaugh - and has been in the league a few years longer.  Therefore, the older brother must win!  Otherwise, I hope it's a good game like the last few Super Bowls have been! Are you rooting for a particular team?  If so, who and why?

Did you know that food photography by restaurant patrons was a phenomenon?  I know some people who like to take pictures of their meals, especially if it's really good, but apparently some restaurants in NYC don't like it.  Maybe it makes the chefs work harder to present their meals or something?  Whatever.  Another reason why New York City is a great place to visit, but not a great place to live...

South Walk-Up at the Texas Capitol

I took this shot during the same visit as the shot in my previous post.  This one was a bit more tricky to process and has a bit more noise in it, but I like how it turned out anyway. 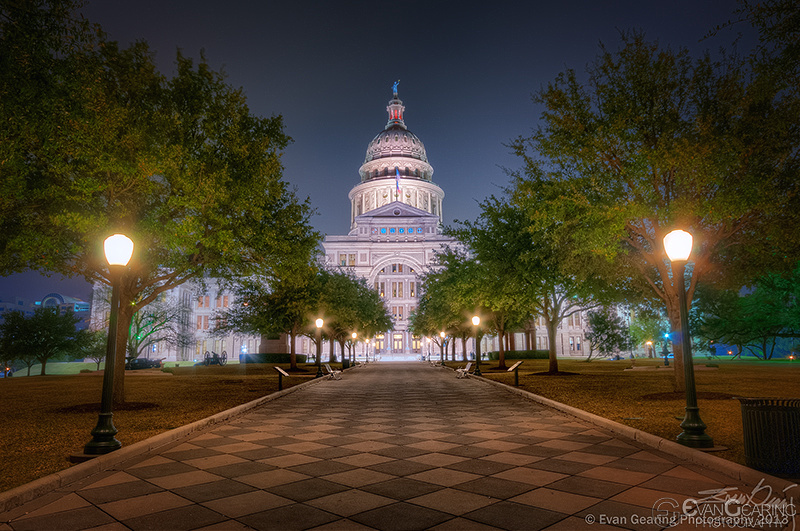