June 09, 2013  •  Leave a Comment
I would love to see the Spurs in San Antonio during the finals!  I mean, we only live an hour and a half away.  The problem is, we don't have thousands of dollars to buy tickets for decent seats! OK, maybe hundreds of dollars, but still, it's expensive!  Oh well, it would still be awesome to see the Spurs thrash the Heat in person for their fifth title!  Of course, I will see it happen on TV, hopefully!

"Howev-uh", (as Steven A. Smith would say), we did get to see the Spurs play the Heat for the first time when Lebron (not one, not two, not three...) James joined the Heat and played the Spurs in San Antonio back in March of 2011.  It was Awesome (with a capital A) because the Spurs won by 30 points.  Matt Bonner, aka "The Red Rocket", aka "The Red Mamba", nailed eight 3-pointers that night!  What a game!

Now that the Spurs are playing the Heat in the finals, I thought it appropriate to post a shot I got from that game in 2011.  It's not a great shot, but it does have Tim Duncan shooting a free throw, with Chris Bosh and Lebron on the key at the top of the shot. I'm not sure who the Spur is between them though.  It also shows Erick Dampier of the Heat and Richard Jefferson of the Spurs, but they're no longer with their respective teams.  You can also see Mario Chalmers at the top right and I believe Dwyane Wade's head which is kind of covered by my watermark.  BTW, why does Wade spell his first name like that, but pronounce it "Dwayne"?  I guess that's a better question for his parents.

As far as this picture goes, I took it with my little Lumix DMC-TZ5 compact point and shoot that mysteriously broke a couple months later.  It had a great 10x zoom on it so you could get pretty tight shots of the floor from the nosebleeds.  That's where we were for this shot!  Although, we weren't so far up that we couldn't see Manu Ginobili's nose!  No seats are THAT far away!  :-)  Speaking of the camera, I just wish a point and shoot would come out from someone that had at least an APS-C size sensor in it.  I know Nikon did, but it's like $1100!  A little cheaper please!  I imagine one will someday that will be less expensive, but we need it now!

Well, I hope you enjoy the shot and "Go Spurs Go!" 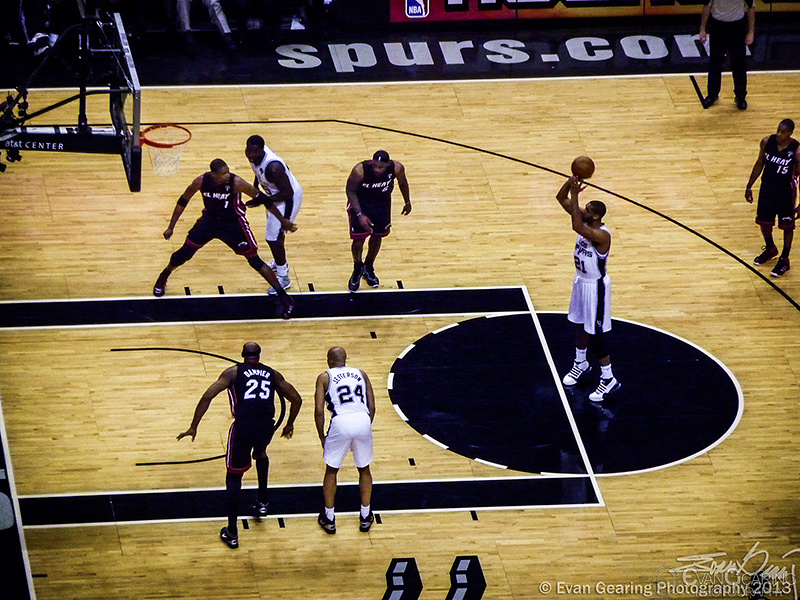