January 11, 2014  •  Leave a Comment
For NFL fans, this weekend is the best of the bunch.  Better than even Super Bowl Weekend.  Why?  Because starting on Saturday at 4:30 PM EST we get 4 games of awesome playoff football all through Sunday night!  The best playing the best!  This weekend has the New Orleans Saints v. the Seattle Seahawks, the Indianapolis Colts v. the New England Patriots, the San Diego Chargers v. the Denver Broncos and the San Francisco 49ers v. the Carolina Panthers!  All are great teams and all have a shot at winning the Super Bowl!  For me, I have a soft spot for the Denver Broncos and their quarterback Peyton Manning.  It would be pretty cool to see him get one more championship under his belt.

So that brings us to the picture.  I took this when Eileen and I went to Atlanta last November.  We went to see the Seahawks play the Atlanta Falcons at the Georgia Dome.  Needless to say the Seahawks killed the Falcons!  But, since the Seahawks are in the playoffs, I thought I should put a picture out from that game.  One thing about that game ticked me off though..  You see the Georgia Dome has a camera policy that states:
So, being a good rule follower, I took my little Sony compact point and shoot for the game.  During the game as well as afterwards, I could not tell you how many people I saw with DSLRs and other interchangeable lens cameras!  I even saw a guy with a Canon DSLR and a fast 70-200 f2.8 lens attached to it!  I was pissed!  I guess their policies are really more like "guidelines"!

Anyway, the picture here shows the Seattle Seahawks on offense in green and white against the Falcons who are in red.  Most of the shots I got are like this one when there wasn't a lot of action going on since the little camera takes a while to focus. I think this was probably the best of the bunch.

Well, enjoy the weekend, enjoy the football and thanks for dropping by! 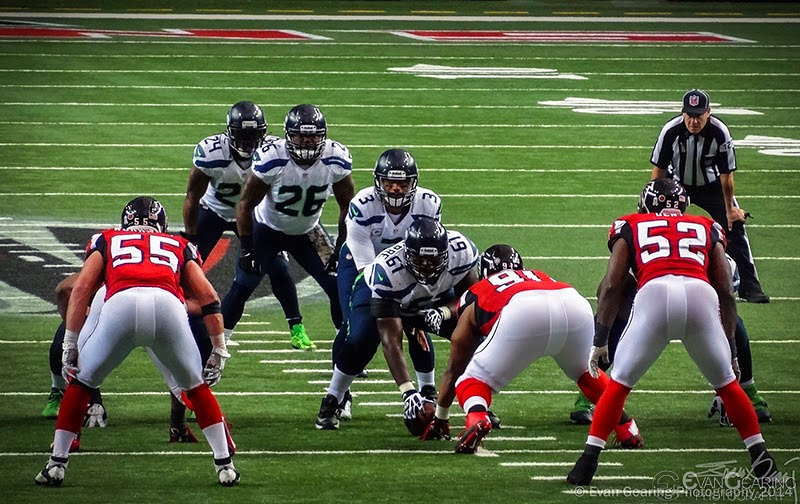