October 23, 2014  •  Leave a Comment
I took this from the Gateway Arch at the Jefferson National Expansion Memorial in downtown St Louis, MO during a gloomy-rainy day.

On Monday before the game, we went up into the Gateway Arch for something to do.  That was quite an experience for sure!  We got into these little pod-like things that have 5 seats in them and rode up to the top.  These things are not for those who are claustrophobic.  I can be a little, but was OK for the most part even though I was a little nervous.  Anyway, when we got to the top, there wasn't much to do but look out the windows and take pictures.  There is no gift shop up there.

So as you can see, the day was rather gloomy and wet.  As a matter of fact, when we were walking to the arch, Eileen said, "You might want to take some pictures of the arch down here before we go up, because who knows what it will be like when we come back down!"  She was right.. Before we went up, it was just cloudy, but when we got up there and when we came back down, it was raining cats and dogs!  So, I didn't get any shots of the outside of the arch.

What I did get is this picture of downtown St Louis with the Old Courthouse in the center - the courthouse known for the famous Dred Scott trial.  There was also some construction going on around the Arch as you can see in the very foreground.

I decided to convert this shot to black and white since the gloominess made the shot almost monochrome anyway and I tried to process it so as to make the courthouse the center of attention.  Did it work?  Any comments are appreciated!  Oh and click on the shot to see a larger view as that is much more interesting when seen larger than this smaller version! 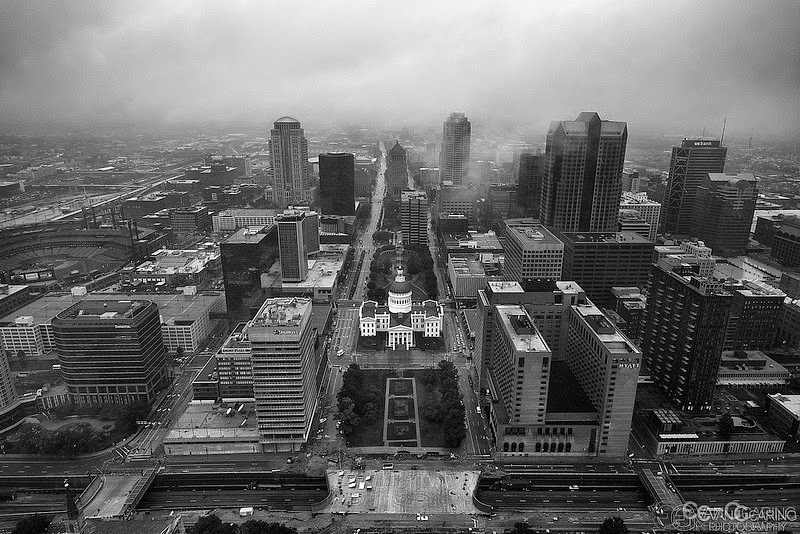