October 02, 2014  •  Leave a Comment
When we went to the Alaska Wildlife Conservation Center, I really enjoyed taking pictures of the animals there.  A couple of the photos turned out nicely, but a lot didn't.  This past weekend I got the itch to maybe shoot some animals again and with that idea in mind, I went out to the Austin Zoo located just west of Austin in Oak Hill.  The Austin Zoo is similar to the Alaska Wildlife Conservation Center as it takes in animals and rehabs them.  Of course, it doesn't re-release animals I don't think because most of them are quite exotic such as lions and tigers and bears.  Oh my!  And monkeys!  A good chunk of these animals were previously owned illegally as pets. So, I think they rehab the animals and maybe ship them back out to other zoos.  You can read more about them here.

One of the animals that I enjoyed seeing and photographing was this monkey.  I'm not sure of the type he is but I did read about him when I was there.  I think he is a patas monkey that are normally found in Central Africa based on this Wikipedia link here.  Guess I should've taken a picture of the sign so I could provide that info.  Anyway, I'm not sure of he's sad or not, but I get that impression by looking at his eyes.  I guess I would be too if I were cooped up in a cage, but hopefully he'll be able to move on to bigger and better things some time down the road.

As far as processing goes, I just did some minor exposure, clarity and vignette adjustments in Lightroom.  I also brightened up his eyes a tad and cropped the overall shot just to put his face in a more "rule of thirds" location.

Now, if I could just figure out how to remove those bars in Photoshop!  That would be awesome!

As always, I hope you enjoy the photo and thanks for dropping by! 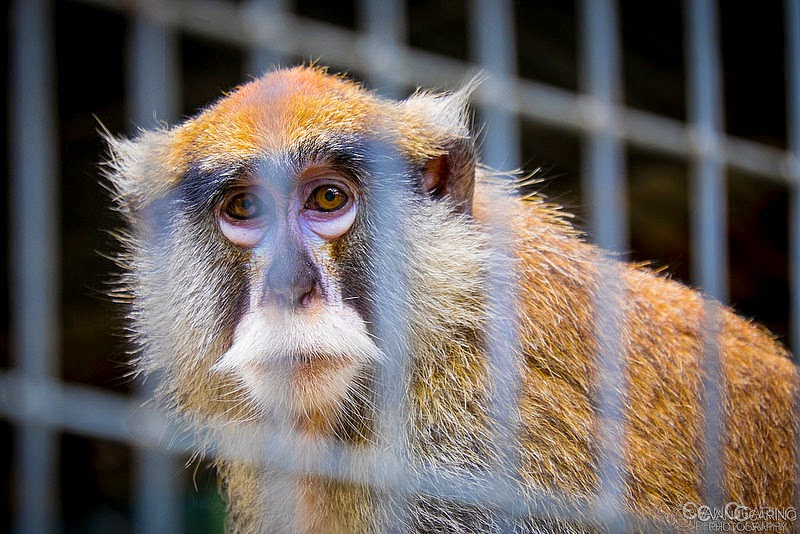