October 15, 2014  •  Leave a Comment
We just got back from a little trip to St Louis to see the 49ers take on the Rams.  The Rams started out great going up 14-0 in the first quarter, but it was all 49ers after that and they won 31-17.  Fun game to see because I did not have a dog in this hunt and it's another stadium that Eileen and I can cross off our bucket list.  We went with our good football buddies Valerie and and Ellen as well and we all had a great time!  The weather was a bummer though so I didn't get as many pics of St Louis as I would have liked, but I got a few shots from the game and this is the first.  This is the 49ers quarterback Colin Kaepernick throwing to receiver Vernon Davis (number 85).

I tell you, this little X-T1 is not too shabby for shooting sports, I don't care what anyone says.  Sure, it's not a Canon 1D Mark IV or whatever, but this camera worked well for me.  I'm happy with it anyway.  However, if I wanted to shoot from the sidelines, maybe I would rent a better one, but I'm happy with this.

I processed the picture using Nik's Analog Efex, with Camera filter #7.  You see the game was a homecoming for the 1999 Super Bowl winning Rams team so the Rams wore their old throwback uniforms in honor of the those guys.  So I thought I'd throwback the pic a little to give it a bit more interest. 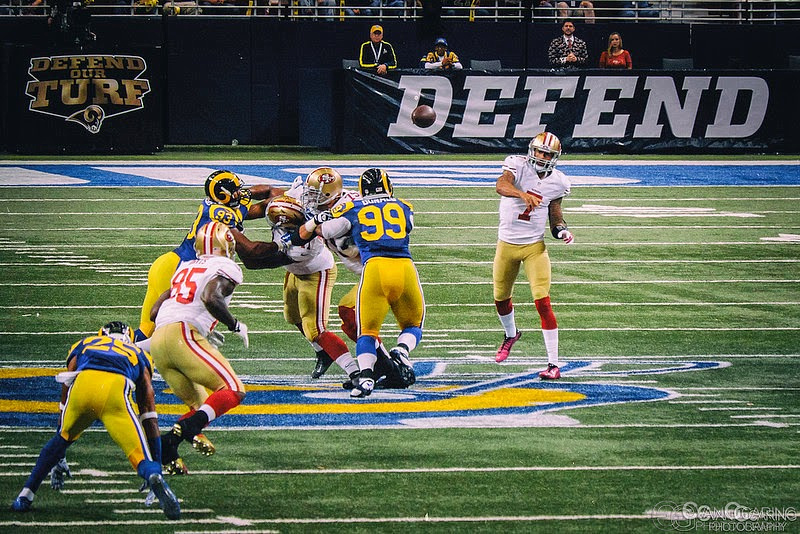