Well, I have finally decided that I am no longer going to use Nikon gear for my photos anymore.  Don't get me wrong, Nikon makes some fantastic stuff.  I have really enjoyed the results I've gotten from everything I've used.  However, they seem to really be slow in the mirrorless camera arena.  I could say the same about Canon as well.  Sony, Fujifilm, Olympus and a few others have surpassed "The Big Two" (Canon and Nikon) with their mirrorless Interchangeable Lens Cameras (ILC for short).  The results these guys get are just as good as DSLRs, plus they weigh less, cost less in some respects and take up less room in the camera bag.  And, the features that these cameras have will work for me more than some of the "Big Two's" offerings such as electronic viewfinders that can overlay a histogram over what you are previewing and you can see what the image will look like before you take it, etc.  There are so many other reasons that I will not get into, suffice it to say I'm ready to make the move!

Why Fuji?  Well there are several photographers I follow out there and all of them have been raving about the X-T1, Fujifilm's latest camera.  Their reviews peaked my interest. Here, read for yourself:

After reading those reviews I did some research myself.  Most everything I could find on this unit was oh so positive!  From the size, to the quality of the camera and the images it produces, to the features and dials, to the weather sealing, weight, lens offerings, etc., it seems to be the best mirrorless ILC out there, for now anyway.  Some reviewers did have quarrels with a few of the buttons and some other things, but all cameras have a little something that won't satisfy everyone.  Take HDR enthusiasts of which I am one... This camera will only bracket 3 shots at 1 EV apart.  Well when I shoot for HDR I need at least 5 shots and preferably 7.  This is a bummer, but it's a trade off I am willing to take.  As a matter of fact, I don't seem to do as much HDR as I did before because technology in photo-processing software as well as digital camera sensors are getting to the point where bracketing isn't as necessary as it was.  The other big drawback is that my D700 is full frame whereas this Fujifilm X-T1 is a cropped APS-C sensor camera.  This is something I can live with because it has 4M more pixels than my full framer and the resulting quailty is just as good, if not better.

After taking it all in, that's where I have decided to go.  Hello Fujifilm!  Nice to meet you!

Photo: Water Crashing on Rocks Below

I'm hoping I might get a couple more wildflower shots before the season runs out, but until then, here's another photo from Shipwreck Beach on Kauai.  This is from the other side of the little peninsula that sort of juts out on the east side of the beach.  You can really get a nice view of the sunrise in the morning with the waves crashing on the rocks about 20-30 feet below.

Click on the image to see a better version. 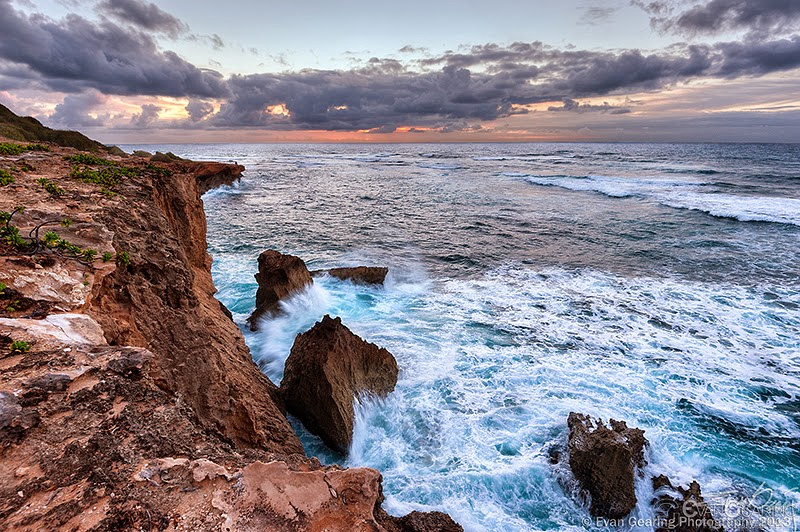