The Strip from the Strat

May 26, 2014  •  Leave a Comment
For a quick minor little vacation, Eileen and I spent two days and three nights in Las Vegas!  We also met our old friend Mike who lives a little ways away in California!  It was a fun little trip!  We even did some things that we weren't sure about, but I won't bore you with those details.  You know, what happens in Vegas stays in Vegas, right?! ;-)  Anyway, while we were there, I took a quick little side trip up to the top of the Stratosphere and took a few snaps of the strip.  It was fun shooting from up there, but I was a little disappointed..

You see there are a couple of BIG hotel/casino things going up at that end of the strip and they are off-again on-again builds.  So since those places are currently under construction (or not), they block portions of the other casinos and also put giant black area in the pictures. You can kind of see what I'm talking about in the center-right of this shot.  That's the location of the "Resorts World" casino that's being built.  It's just a big black void.  And to the lower left of the shot, across from the Hilton in the foreground, there is another big monstrosity going up called "the Fontainebleau".  I kept it out of the shot, but it made it hard to get decent landscape orientation shots of the strip because it blocked out everything to the left of the Encore.  Bummer.  Still a fantastic view from up there, though!  Oh and lastly, you are not allowed to take tripods to the top of the Stratosphere, so this shot was hand-held and thus a tad noisy...  Still gotta love all the lights, though... 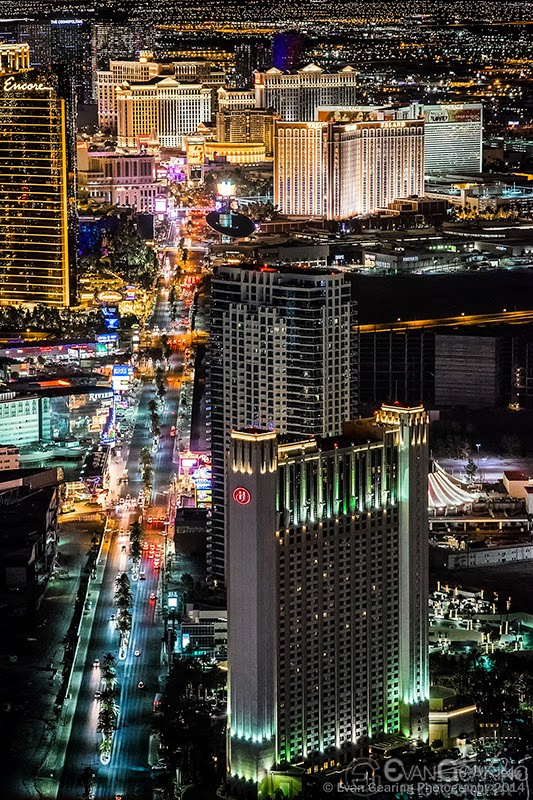