October 24, 2015  •  Leave a Comment
The main reason for our trip to San Diego was to knock another stadium off our bucket list.  We have been to about 10 stadiums so far so we're almost a third of the way there!  It's so much fun, but we still have yet to knock out some of the stadiums in the north.  We have to plan those for early in the season!

For me and this little blog and photography habit that I have, taking pictures at a football game is a blast!  However, the NFL makes it a little difficult to take cameras in.  They have the policy about taking stuff in in only clear bags and everything has to be out of your pockets as you go through the gates.  Taking a camera with 2-3 lenses to shoot games can be tricky.  I like to cram lenses in pants pockets with batteries and other things, so the policy makes it a pain.  So this year I decided to get an ultra-zoom camera for this very purpose.  One camera, no fuss no muss.  There are a lot to choose from out there.  I really wanted to get the Nikon P900 because it has a super 83x zoom lens.  However, it does not shoot raw and it doesn't have a constant aperture through the zoom.  So after lots of searching, I settled on the Panasonic Lumix DMC-FZ300 as seen below: 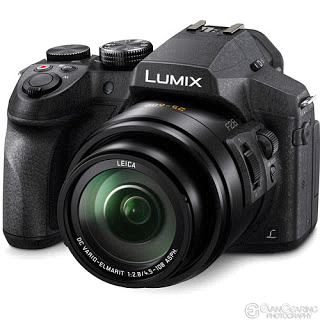 This camera has a nice 24x zoom lens, equivalent of 25-600mm in 35mm format if I'm not mistaken, has a constant f2.8 aperture throughout and it shoots raw.  This is pretty much what I was looking for and as matter of fact it just came out at the end of last month. The camera is even weatherproof, so no bag to take to the stadium in case of rain. Yeah, rain in San Diego, right. :-)

I enjoyed shooting it for the most part.  It has customizable fn buttons and it has a nice touchscreen lcd monitor on the back which makes it easy to adjust focus points and stuff.  The fn buttons aren't really the physical buttons on the camera though, they are more like tabs on the touchscreen monitor.  That's ok, but if the actual buttons could be changed, that would be nice.  The screen menu was a little difficult for me to navigate, too, but I think that's just because I am used to my Fuji stuff and need more exposure to this one.

When it came to wanting to shoot action on the field, I only had the camera's drive set to single shot and it took me a while during the game to find the high continuous mode, but I did.  That helped a lot!  The camera is pretty fast for continuous shooting, but trying to track movement once you start shooting is kind of weird because you get quick previews of each shot which interrupts the flow of the action.  In other words, when I was watching someone run with the football or trying to receive a catch, I would start shooting and then I would lose track because the action would stop on the camera for each individual picture and that goofed me up. Other than that, not too bad.

Also the stabilization in the camera is pretty good.  Even when I wasn't shooting pictures, I would watch the game though the camera with it zoomed all the way to the field and I could see everything on the field really well!  I felt like one of the ESPN camera men there! Wouldn't THAT be an awesome job, btw?

Lastly, the zoom was just about the best you could ask for in a camera like this.  If it was any longer with a constant 2.8 aperture, the camera would be rather big.  Same goes for the sensor; it sports a 1/2.3 sensor and if it was APS-C or larger, the camera would be huge, too. This camera is a nice size, just a tad smaller and lighter than my Fuji X-T1 with its 18-55 attached.  You can see the range of the lens in the two photos I have posted below.  They are both jpgs taken straight from the camera, un-retouched.  The one of the stadium is with it zoomed all the way out.  You can see the view we had from our seats.  We were in the upper deck about half way up.  Pretty high up there.  The shot of #2 Michael Vick, is with the camera zoomed all the way in.  At the time I took that shot, he was on the near sideline around the 30 yard line near us, I believe.  Not too shabby!  And, as you can see with the Vick shot, the lens is quite sharp!

So overall, I like the camera. I just need more time to play with it and get used to its menu system and customize it more for my style.  I would probably give it 4.5 out of 5 stars.  That's the best I would give anything because I don't think anything is perfect.  Except my wife! :-)

Oh, before I go, my next couple of posts will be action shots from the game.  They are raws that I did a little post-processing on and might show you a little more of what this camera can do. Qualcomm Stadium at Dusk, camera zoomed all the way out, 24mm. (Click on pic for better version) Michael Vick (#2) warming up with teammates prior to game, camera zoomed all the way in, 600mm. (Click on pic for better version)