November 06, 2015  •  Leave a Comment
Of all of the pictures I took during the Steelers v Chargers game, I think this is my favorite.  This guy came up the tunnel for our section and stood at the railing and watched the game for a few minutes right at the beginning.  Isn't that tattoo incredible?  I mean, to like a team so much that you are willing to tattoo the name of the team to the back of your melon?  Wow!  Well, at least it wasn't the front! :-)  Maybe it's not a tattoo, but more of a temp stencil?  Hard to say..  His jersey was pretty cool, too.  He had all six of the winning superbowl logos on the back of it.  It was awesome!  Makes me want to become a Steelers fan, you know?  I wonder if he lets his hair grow out in the off-season, if he has any that is...

I took a page out of Scott Kelby's Recipes book for this one, the bleach bypass recipe to be precise.  It turned out to give the shot a look similar to Fuji's Classic Chrome film simulation, which I really like.  I could have used Nik's Color Efex 4's bleach bypass filter, but I wanted to experiment a little  in LR with the develop module a bit instead.  It's not as extreme as Nik, but a cool look nonetheless.

I hope you like the picture and thanks for stopping by! 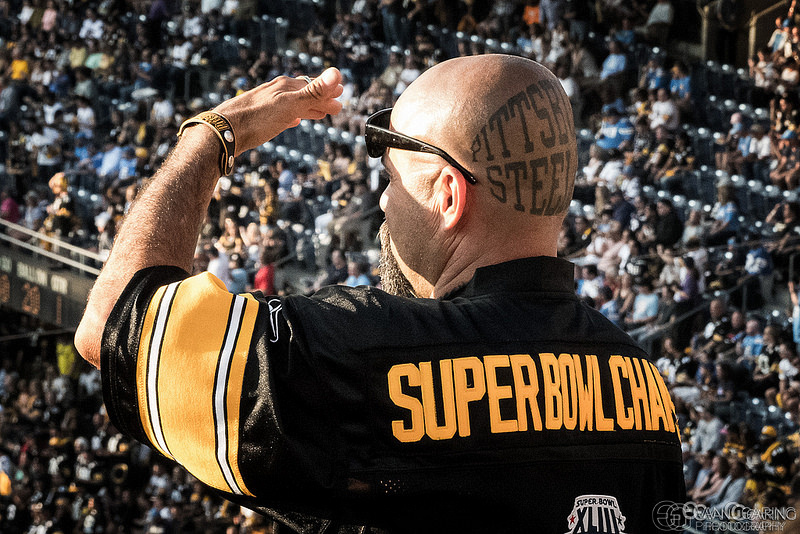