Hondo and Hats of Luckenbach

December 09, 2015  •  Leave a Comment
I went out to Luckenbach, TX last Saturday.  I've always wanted to go there since it has a sort of legendary history with Willie Nelson's 4th of July concerts and other things.  There's not much there other than a post office that has been converted to a souvenir store, a dance hall and a few other buildings.  Out behind the store is a stage and some picnic tables.  Looks like a fun place to see live music some time.  But, at the time I went, there was no live music and it was pretty dead.  So, I took some pictures of course!

This shot is from inside the post office.  It's a shot of some hats - obviously - along with a painting of Hondo Crouch.  He's quite a character and the guy who basically turned Luckenbach into the music venue that it is now, from what I understand.  He had quite an imagination and might have been a little off his rocker, in a good way.  Click here to read more...

This shot is a little perplexing to me.  I wanted it to be totally symmetrical, but the way everything lined up, I had to center the image based on the way the hats were arranged or with the light and the painting being in the center.  I opted for the latter and centered the shot on the painting and the light above.  I hope it worked, but you can tell me otherwise if you are so inclined.

Enjoy the photo and thanks for dropping by.  (Click here for a larger, more detailed version.) 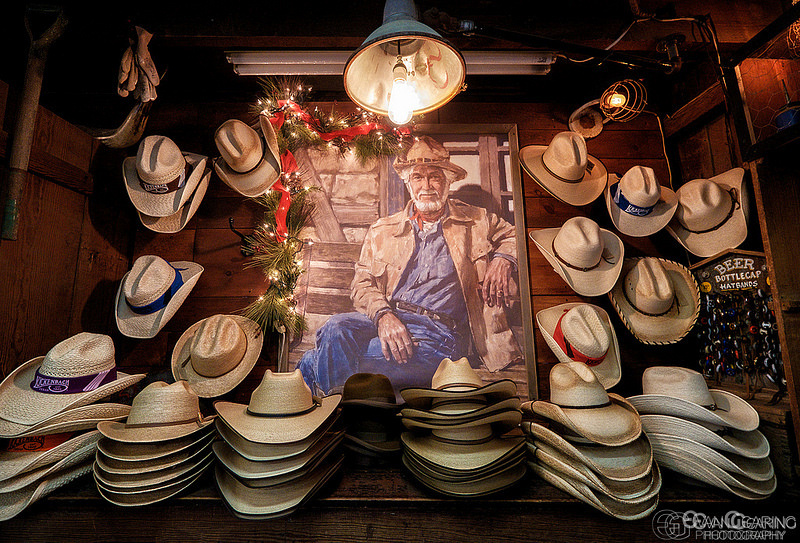