Just east of La Grange on highway 71 is a classic car dealership called Thunderbirds Southwest.  It is owned by a gentleman by the name of Lance Harrington.  He has a passion for flipping classic cars.  He started out of his home garage in Houston restoring old Ford Thunderbirds and his business grew so much that he bought some acreage outside of La Grange and built his own place.  Now he restores all kinds of other cars as well.  Not only are old Thunderbirds his favorites, but so are old Nash Metropolitans.

Lance is super-friendly and came up to me and just started chatting about everything.  He even showed me an old Jaguar in the back that he is working on.  It was pretty awesome!

He has some definite views on current events and you can certainly tell by the decor in his showroom.  Depending on which side you are on, you will either love him or hate him.   He also has a great 1950s motif throughout his establishment, too.  I'll leave that to your imagination, but recommend you stop by if you are ever driving between Austin and Houston.  Hopefully you'll like what you see, if not the politics maybe the cars.

The cars seen here are 1964 Ford Thunderbirds and are in pretty good shape. 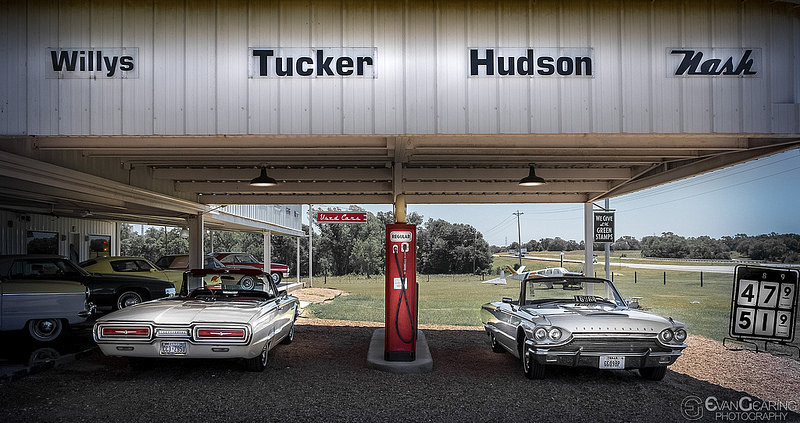